What is the Humaneyes Vuze VR?

The Humaneyes Vuze VR is a 360-degree video camera that also shoots in 3D. In fact, where most 360 cameras are still using two lenses and sensors, the Vuze VR has eight – all of them capable of capturing Full HD. And yet it costs under £1,000.

This may sound too good to be true, but NASA and National Geographic will be sending a Vuze VR to the International Space Station to shoot footage for the forthcoming One Strange Rock documentary series. Are its abilities truly “out of this world” then?

The Vuze VR uses eight Sony Exmor RS IMX408 CMOS sensors. Each one is a reasonable 1/3.61-inch size and offers a 2.2-megapixel resolution, allowing video capture in Full HD. The eight lenses and sensors are arranged two per side around the disc-shaped unit. The two lenses on each edge allow stereographic as well as 360-degree video capture. 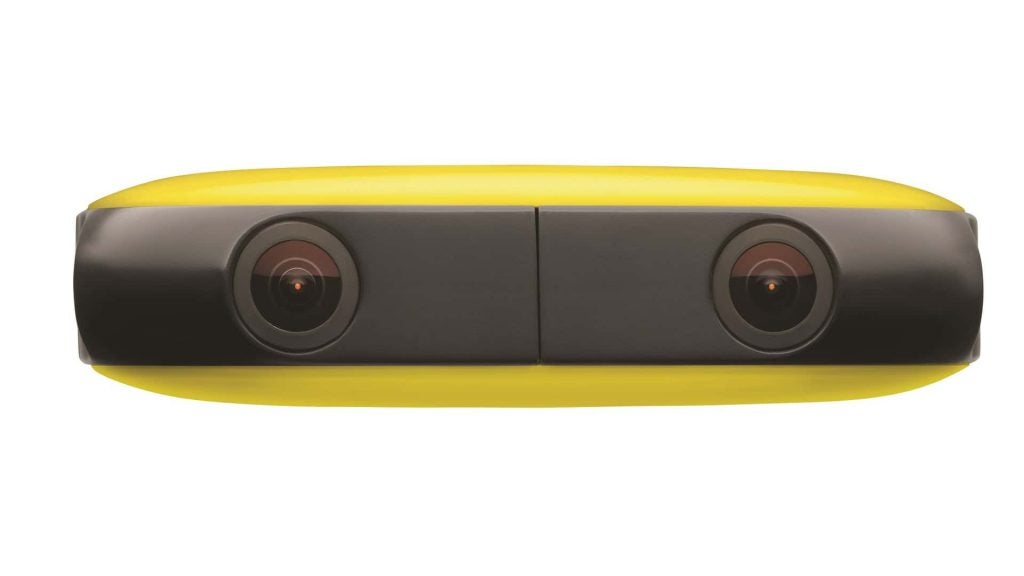 All these separate video streams are combined into a 4K spherical resolution per eye at the output stage. However, the actual raw footage is captured to a file with a resolution of 3200 x 2176 at 80 or 120Mbits/sec, with microSD cards used for storage. A 64GB card will be sufficient for around 70 minutes of footage at the top data rate.

Although the Vuze VR is quite rugged, and rated IP64 for dust- and splash-proofing, the large flat size won’t lend it to action camera-type usage. In addition, it weighs 450g, which is a little weighty to be attached to a helmet when engaged in extreme sporting activities. Nevertheless, Humaneyes has thought about consumer appeal. The Vuze VR is available in four colours – black, yellow, red or blue – so you should find one to match your outfit. 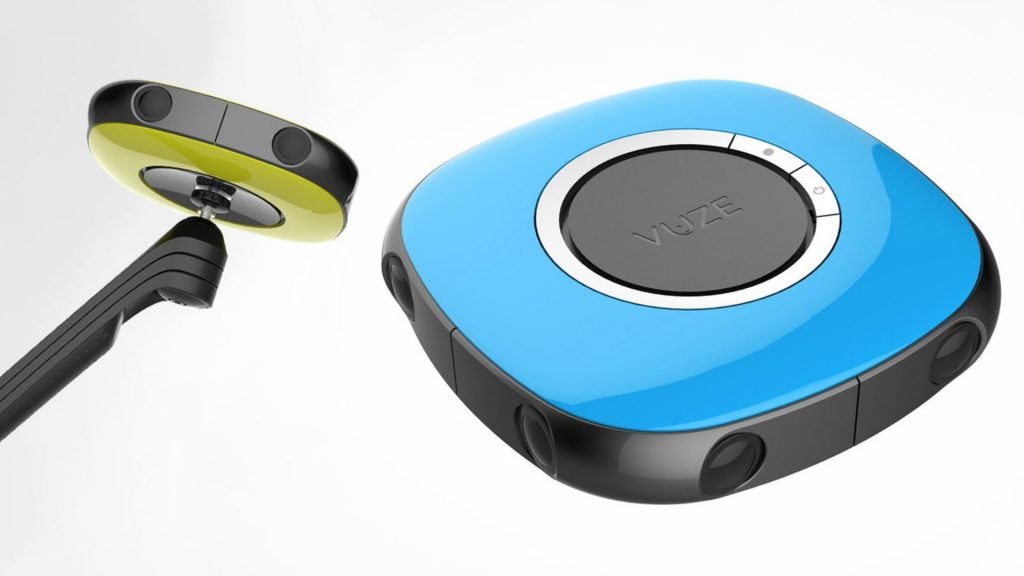 There’s a standard tripod screw-mount on the bottom, and a small handle is included in the box so you can use the Vuze VR hand-held – although this definitely fits its “mini-handle” description. It’s comfortable enough to use, but doesn’t feel as secure as the handle supplied with Garmin’s VIRB 360, for example. You can purchase a tripod that’s similar to the Garmin model from Humaneyes, however, at a cost of £26.95. There’s a robust carry case included in the box, too.

The Vuze VR has very little in the way of control built into the body itself. There are precisely two buttons on the top of the device: one to turn it on, and the other to toggle recording. There’s a tiny button for toggling the Wi-Fi on and off hidden under the rubber flap that protects the microSD card slot and USB socket, too. 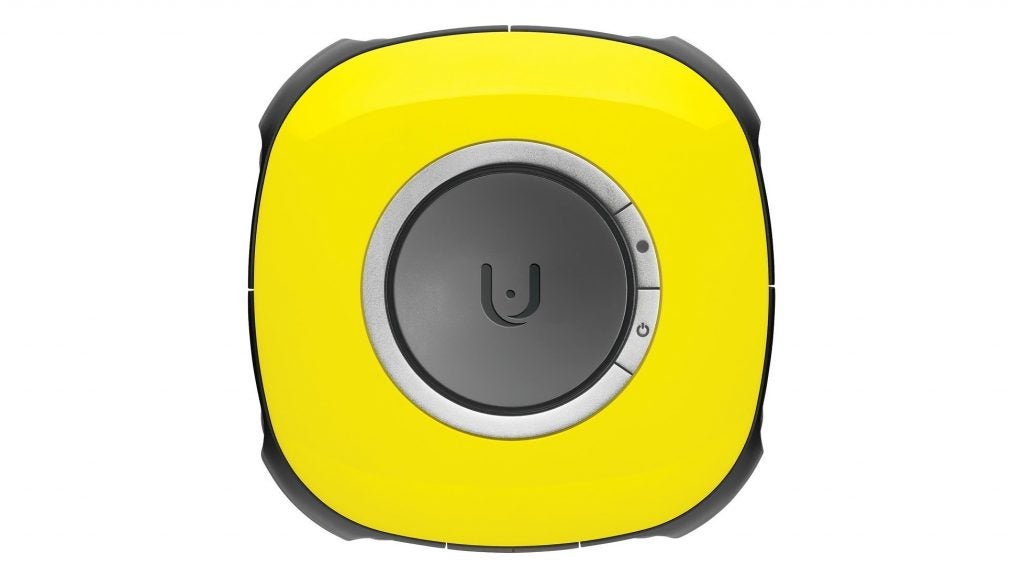 Once the Wi-Fi is enabled, you can switch to the obligatory smartphone control app. This isn’t particularly feature-rich; there isn’t even a preview of what the lenses are seeing. The forthcoming Vuze+ will offer such a feature, however. The main screen simply provides the option to trigger recording, and switch to photo mode. When you hit record, the app just shows how long you’ve been capturing video. 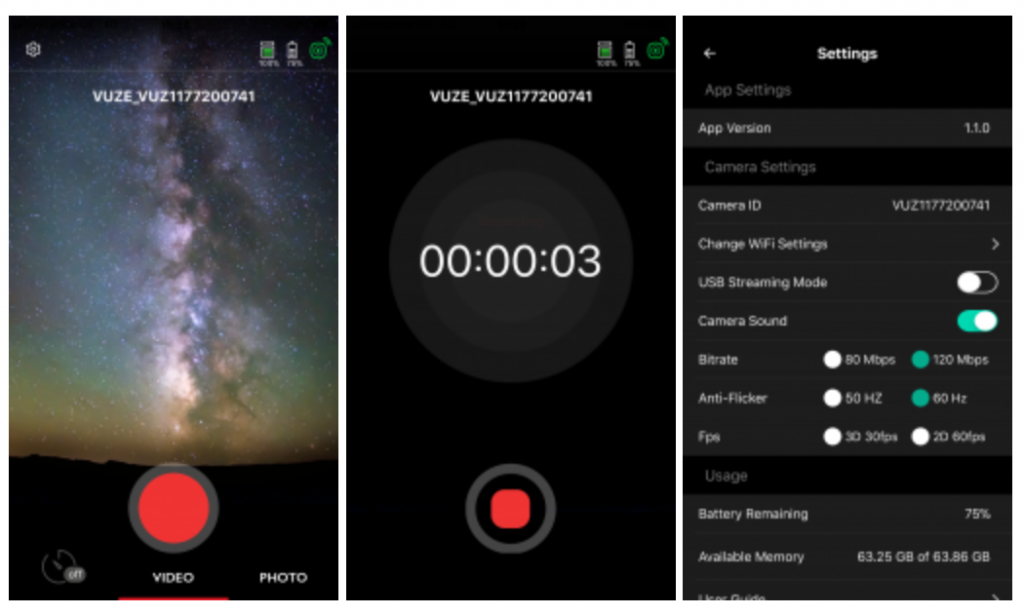 There is a settings screen, but this doesn’t feature many options. You can’t change the recording resolution. You can select 80 or 120Mbits/sec data rate, and there’s an anti-flicker option for 50Hz and 60Hz AC electrical frequency regions, although the video is always recorded at 30 or 60fps.

The option to switch between 2D and 3D didn’t seem to be active. It’s also possible to switch the Vuze into USB streaming mode so you can use it like a 360 webcam. The readouts of remaining battery time and storage capacity are also rather handy.

Once your footage is captured, you’ll need to install the Humaneyes VR Studio desktop software to manage your footage. This is available for Windows and macOS, although the latter is currently still in beta. The software is exclusively for importing and stitching footage shot on the Vuze VR, and doesn’t really have any editing capability other than setting in and out points.

For this reason, a 60-day trial of RealSpace 360 Cinema is also included for more sophisticated work, but you’ll still need VR-aware video software such as CyberLink PowerDirector 16 or Adobe Premiere CC 2018 for long-form editing.

The Humaneyes VR Studio software provides plenty of control over how your footage is rendered out, however. The raw footage looks even stranger than other raw 360 footage we’ve worked with – from the Garmin VIRB 360, for example. The video frame contains four fish-eye clips, and they’re on their side. The right-hand pair are for the right eye in the stereo image, and the left-hand for the left.

The Studio software lets you flip your footage 180 degrees, if you were using the Vuze VR upside down. You can choose where the centre of the shot is placed by panning left and right; not up and down, though. You can cut the field of view, and place a custom patch top and bottom to obscure the blind spot and tripod. 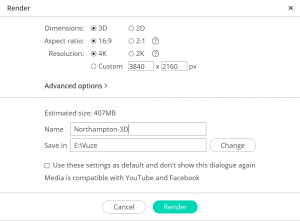 Horizontal motion stabilisation is available, too. You can adjust the stitching, including choosing the blending level and colour matching. You can also adjust the colour temperature, saturation and exposure, including separate controls over shadows and highlights. You then have the choice to render out in 3D or 2D, 16:9 or 2:1 aspect, and 4K or 2K resolutions – although custom frame sizes are also possible.

Assessing image quality with 360 cameras isn’t as straightforward as it is with regular camcorders. Footage is recorded into video files, and the stitching into equi-rectangular format for distribution, both play a part alongside the raw detail, exposure and colour fidelity. 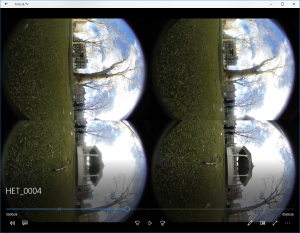 The stitching process for Vuze VR footage is definitely complex, especially when you look at how the raw footage is composed of four different views. For objects that were too close to the lens, there were some clear issues with stitching , which isn’t so obvious with non-3D alternatives such as the Garmin VIRB 360 or Ricoh Theta S. Humaneyes recommends that objects should be at least 150cm from the corners of the camera.

The overall image quality – whether watching the 2D or 3D version – is a little muddier than the best 360 cameras I’ve tested; particularly the Garmin VIRB 360, although ahead of the first generation models such as the Theta S. However, once you upload the 3D footage to YouTube and don anaglyph glasses, this can mostly be forgiven, because the 3D works well. It adds yet another element to the immersive quality of 360, and elevates the Vuze VR into a space where there currently isn’t any competition.

Here is a sample of 2D footage shot indoors with the Vuze VR:

This is the same Vuze VR indoor footage output as 3D (anaglyph glasses required for viewing in 3D):

Here is a sample of 2D footage shot outdoors with the Vuze VR:

This is the same Vuze VR outdoor footage output as 3D (anaglyph glasses required for viewing in 3D):

Why buy the Humaneyes Vuze VR?

The Humaneyes Vuze VR doesn’t have quite the raw 2D quality of the Garmin VIRB 360, but the ability to shoot 360 in 3D is currently unique at this price. The 3D spatial depth adds an extra level of immersion to the 360 experience. Whilst the Vuze VR isn’t the perfect 360 camera for under a grand, for creating certain types of footage, there currently isn’t any other option that doesn’t cost you thousands.

The Humaneyes Vuze VR is comparatively expensive and its raw quality isn’t best-in-class; but the ability to shoot 360 in 3D is unique.