Behind the standard 50mm, the 35mm lens is probably the second most common fixed focal length for full-frame camera users. Just about every camera brand makes its own, and I suspect that most photographers who want one already have one – or at least have their eye on one. There’s a range of maximum apertures to choose from and optics provided in just about every mount in existence. Tamron’s other new fixed focal length, the SP 45mm f/1.8 Di VC USD, stands out because it offers a slightly alternative angle of view to those available elsewhere, so it naturally finds itself in a unique position and almost without direct competition. This 35mm f/1.8 model, though, sits in an already busy market and will have to rely on other charms to gain the attentions of well-distracted wallets. I suppose that if Tamron wants to make a serious go of having a proper range of general-purpose fixed-focal-length lenses to sit alongside its extensive collection of zooms, the company needs to have a 35mm in its offering. However, the question is whether this is just a lens to tick a box in that range, or if it indeed offers something more we should all pay attention to.

The Tamron SP 35mm f/1.8 Di VC USD is suitable for use on both full-frame and APS-C-sensor cameras, providing a standard-type focal-length appearance for cropped-sensor users and a moderate wideangle for those with full-frame cameras. The lens uses ten elements in nine groups, and includes two glass moulded aspherical lenses, one element made from low dispersion (LD) glass and a further two made with extra low dispersion (XLD) glass. The aspherical elements are there to ensure that focus is maintained across the flat surface of the sensor, and to reduce the blurry rotation effect that sometimes occurs due to sagittal coma aberrations. The aspheric glasses should also help to prevent barrelling and pincushion distortion – so straight lines close to the edges of the frame should remain unbent.

Tamron’s LD and XLD glasses intend to reduce the chromatic faults that see coloured highlights appearing around high-contrast edges. That three of these elements are in use suggests the company wants to produce a lens that can be used effectively at large apertures.

Like the 45mm that we previously reviewed, this 35mm model uses a nine-bladed iris, which will help to create attractive circular out-of-focus highlights that don’t have hard-angled edges to draw attention away from the subject.

It’s quite unusual to have image stabilisation in a wideangle lens, as traditional thinking says that the lower magnification means there’s less impact from camera shake. As sensor resolutions increase, however, the effects of a moving camera become much more obvious, because we can enlarge our images so much more – so all stabilisation help should be  gladly accepted. I also enjoyed the ability to use the lens at what would otherwise have been ‘dangerous’ shutter speeds, so that I didn’t have to crank up the ISO so much in  low-light conditions.

Another unusual feature of the Tamron SP 35mm f/1.8 Di VC USD is its closest focusing distance. Canon and Nikon equivalent lenses can focus to 24-29cm, but this model gets as close as 20cm.

Tamron uses its eBAND (Extended Bandwidth and Angular-Dependency) and BBAR (Broad-Band Anti-Reflection) coatings to reduce flare, while fluorine coatings on the front element are designed to repel water and fingerprints so it can be kept clean. Also of note is the weather proofing of the lens, with seals around the mount and the joins that allow users to carry on shooting in the rain.

Like Tamron’s 45mm lens in the same series, this 35mm is pretty big and heavy when compared to the average models of its focal length and aperture. I used it on the Canon EOS-1D X and it looked perfectly at home working with a body equally bulky and bulbous.

Weight doesn’t always equate to good build, but this lens really does feel very well made and as though it’ll endure the knocks and bumps of life without dramatic effects.

The external design of the barrel is really rather nice, with the company mixing a soft- sheen black paint with the fine ribbed rubber of the focusing ring. The focusing ring is easy to find should you need it, and the AF/MF and VC switches are well positioned for the thumb of the left hand. These switches are hard to knock accidentally, even though they sit proud of the barrel so they can be found easily.

The lens looks good, feels good and is very nice to use.

Having been impressed with the performance of the Tamron 45mm f/1.8 lens, I was rather hoping for great things from this other model in the series. I was especially looking for good wide aperture performance, as this gives us the creative freedom to use whichever apertures we need to create the effects we want to achieve. Inevitably, the widest apertures are not the best the lens has to offer, but they are still very good and more than usable. There is quite a resolution jump between f/1.8 and f/2.8, from which point the corners begin to catch up with the centre. Sharpness across the frame is most uniform at f/8, but already ultimate resolution has begun to fade slightly at that point. The lens is best at the wider end of the mid-range, so f/4-f/5.6, and is better in the centre at f/1.8 than it is at f/11.

The AF feels pretty quick thanks to the USD motor, but I felt the reactions weren’t quite perfect with very fast-moving subjects, although for most normal shooting occasions it will be more than good enough.

I was pleased with the mostly well-controlled chromatic aberration, with nice clean high-contrast edges and no purple fringing to speak of even close to the corners of the frame. That isn’t to say there is no chromatic colouration, but that which exists comes out in the wash with no after-effects via the automatic correction in most software packages.

Drawing is good enough that architecture can be photographed without buildings appearing to bow at the edges, and while there is a decent amount of darkening in the corners at the widest aperture settings it disappears from obvious view by f/4.

I have been impressed by the flare performance of the lens, so the company’s coating strategy seems to work rather well.  Shooting with a patch of sun shining around a corner in one instance, the flare was contained within the small section of the image in which the light appears, and with no obvious impact of the rest of the picture. Contrast in the other areas of the frame looks quite normal, suggesting that internal reflections have been contained and reduced very quickly.

Rendition of out-of-focus areas is very pleasant, with sparkling glass, metal and water forming nice rounded highlights with soft edges. This creates a smooth background that’s free of optical distractions so the attention is allowed to stay more easily on the focused subject.

You can see from the graph below that this lens keeps its best performance for wider apertures, making it ideal for handheld shooting. Our Applied Imaging tests reveal very impressive results in the centre – remarkably it’s as sharp wide open as it is at f/8. The corners aren’t quite as sharp, but that’s expected from a 35mm prime. The very best results overall are seen from f/4 to f/11.

Some darkening of the corners is definitely noticeable at f/1.8, but it’s not excessive. The fall-off profile is also rather gradual, which makes it relatively unobjectionable in most shots. The level of vignetting fades quickly on stopping down, and is almost non-existent by f/4 for non-technical applications. Overall, this is a good performance. 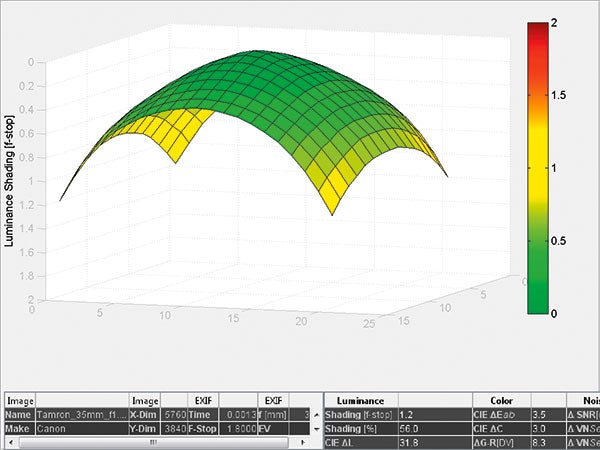 As you can see below, distortion is low, with only slight curvature of lines that should be straight. This barrelling will likely be most noticeable in close-up subjects of a particularly square nature that sit close to the edges of the frame, but in most cases distortion doesn’t play much of a role.

The Tamron SP 35mm f/1.8 Di VC USD is a big and heavy lens, but it produces quality images. We make choices that often come down to quality against convenience, and in this case we’re looking at a lens that aims for clean images at the cost of size. 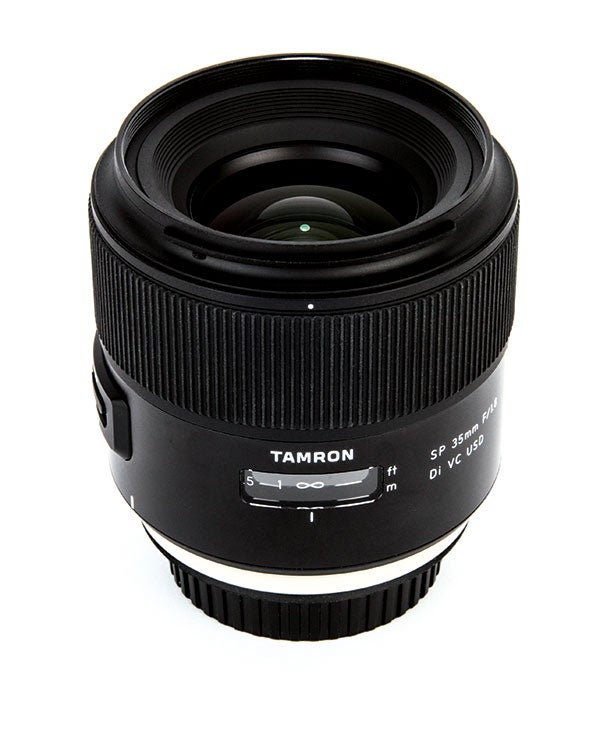 This is a crowded market, so it makes perfect sense that Tamron has tried to differentiate its 35mm lens from the others available. I was pleased to have image stabilisation on my side as I like to shoot handheld in low light, and I was delighted to be able to shoot at f/1.8 without suffering a huge penalty. While quality is definitely better at f/4 and f/5.6, at f/1.8 and f/2 I was still very happy with the results.

All in all this is a very good lens. Tamron hasn’t just made a me-too product, but has brought something new to the moderate wideangle sector. The unique features make it stand out, and those shooting general or documentary-style work will welcome the emphasis on image quality at wide apertures. I’m impressed.