At first sight, Panasonic’s latest lens, the Lumix G 25mm f/1.7 Asph, may look redundant before it’s even hit the shops. After all, it’s not as if there’s a shortage of similar options for Micro Four Thirds. But then you notice the price – just £159 at launch – and it makes sense. This has the potential to be the truly affordable ‘normal’ lens that the system has hitherto lacked.

Let’s first take a look at the alternatives that are already available. Panasonic itself makes the compact Lumix G 20mm f/1.7 II Asph and the faster Leica Summilux DG 25mm f/1.4, but they cost £270 and £380 respectively. Olympus has the M.Zuiko Digital 25mm f/1.8 that offers a near-identical core spec in a smaller size, but for around £290. Sigma makes 30mm f/2.8 and 19mm f/2.8 DN lenses that sell for a mere £130, but they gather 1.5 stops less light at maximum aperture. Finally, several ultra-fast manual-focus 25mm f/0.95 options are available from Voigtländer, Mitakon and SLR Magic, but at two or three times the price. Clearly, none of these gives quite the same combination of fast maximum aperture and low price.

This means that for budding photographers who’ve just bought into Micro Four Thirds, Panasonic’s new optic could well be the ideal second lens. Its fast maximum aperture allows use of faster shutter speeds or lower ISO sensitivities in low light, while also giving increased background blur when you wish to focus attention on a specific subject. It’s also small and light enough to carry around all the time. So let’s see if it lives up to expectations.

Comprising eight elements in seven groups, the Panasonic 25mm has a more complex optical construction than most lenses with a similar angle of view. It also includes one ultra-high refractive index glass element and two aspherical elements, which are designed to minimise chromatic aberration and peripheral aberrations. The diaphragm comprises seven rounded blades, allowing the aperture to remain circular at larger f-numbers, which usually gives a more attractive quality to the background blur. It’s designed to be stepless and, like the focus motor, silent in operation, making the lens suitable for video use. However, there’s no optical image stabilisation on board.

A broad manual-focus ring covers much of the barrel, and drives the lens’s focus group electronically. At the front is a thread that accepts 46mm filters, which don’t rotate on focusing. Behind it is a bayonet mount for the lens hood, which comes included in the box rather than being an overpriced extra. The lens is shipped with a cosmetic ring covering the hood mount, which I removed immediately and left in the box. Lens hoods don’t just shield the lens from stray light, but also protect the front element from accidental bumps, and I would encourage their use as a matter of course.

At 52mm in length, 60.8mm in diameter and 125g in weight, the 25mm f/1.7 is a fairly small lens, although it’s not as compact as Olympus’s equivalent or Panasonic’s slimline 20mm f/1.7 pancake optic. Its light weight is substantially due to plastic barrel construction, but thankfully the mount is metal, which rightly or wrongly always inspires more confidence than plastic versions. The lens feels well made considering the price, although it probably won’t stand up to as much abuse as more expensive alternatives. Because of its compact size, the lens handles well, even on small bodies such as the Panasonic GM and GF series, although it’s an equally good match for DSLR-style cameras such as the Panasonic Lumix DMC-G7. Our review sample came in a matte-black finish, with a silver version also available.

As we’ve become used to from Panasonic, the lens focuses quickly, silently and decisively, thanks largely to its internal focus design.  With the latest cameras, it will also continue to do so in remarkably low light without hunting back and forth for focus position. Notably, it’s much faster at autofocusing than Panasonic’s 20mm f/1.7 pancake, which is a six-year-old design. The focus-by-wire manual-focus system is likewise responsive and straightforward to operate.

Autofocus is, in the grand scheme of things, very accurate, regardless of whereabouts in the frame the focus area is positioned. However, during the course of my testing I came across a slight catch; the lens’s plane of sharp focus shifts forwards fractionally on stopping down, which is a symptom of residual spherical aberration. Because Micro Four Thirds cameras normally focus with the aperture set wide open, this can result in the edge being taken off the sharpness when you’re shooting at f/2.8, particularly with close-up subjects. However, while this effect was easily measurable in our studio testing of the lens, it’s not something many users are likely to notice during normal shooting.

I tested the Panasonic 25mm f/1.7 on several Micro Four Thirds bodies, including the Panasonic Lumix DMC-GM1 and Olympus OM-D E-M5 II. In general, I found it to be a pretty accomplished performer, giving attractive images that belie its bargain price.

At f/1.7, images are a little soft when examined at the pixel level, but stop down to f/2.8 and they gain noticeably more bite. Sharpest results are generally obtained around f/4-f/5.6, and stopping down further sees diffraction progressively reducing pixel-level crispness; personally, I’d never use an aperture smaller than f/11. It’s important to understand that this isn’t a defect, but an inevitable consequence of optical physics. With smaller sensor formats such as Micro Four Thirds, you simply shoot at larger apertures than with full-frame or APS-C cameras. So if you’d normally use f/8 on full frame, the rule of thumb is to shoot at f/4 on Micro Four Thirds.

Panasonic has adopted its usual approach of correcting distortion in software, and in practical use you’ll have to go out of your way to get anything other than perfectly square images. Likewise, vignetting is too low to be noticeable in most real-world use. Some green and magenta fringing can be visible in out-of-focus areas of the frame at larger apertures, but it’s not overly distracting. If you use the lens on older Olympus bodies that can’t correct lateral chromatic aberration, you’ll also see minor green and magenta fringing towards the edges of the frame, but again it’s not very objectionable.

Out-of-focus backgrounds are in general drawn relatively attractively, thanks in part to the lens’s circular diaphragm. In fact, the lens’s main flaw is when shooting directly into the light, where strong veiling flare can cover much of the frame. In fairness, though, this isn’t unusual with fast primes.

These charts show that the 25mm is a very decent performer according to our Applied Imaging tests. It’s a little soft wide open due to residual spherical aberration, but improves quickly on stopping down. The corners are also impressively close to the centre in terms of sharpness. As tends to be the case for Micro Four Thirds, you’ll get the best results overall from f/2.8-5.6, but apertures smaller than f/11 should be avoided.

As is usual for Micro Four Thirds, shading is really rather low. When wide open at f/1.7 there’s less than a stop of light fall-off in the corners, which will rarely be noticeable in normal use. Stop down to f/2.8 and there’s barely any trace of vignetting. 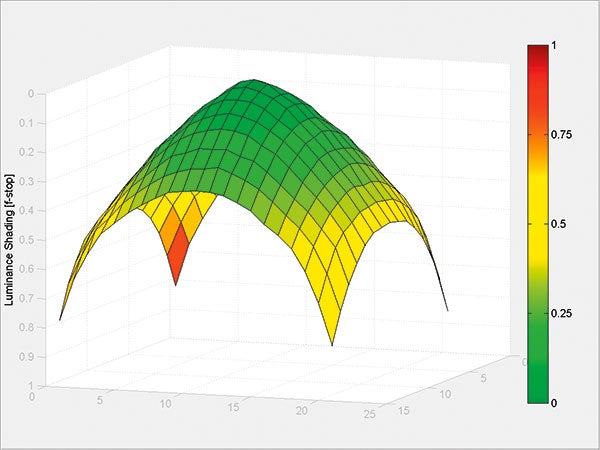 Analysis of the camera’s raw files reveals that Panasonic has adopted its usual approach of leaving a little more barrel distortion than would be usual if this were a DSLR lens, and correcting it in software. This is applied automatically during viewing and shooting, and by most raw conversion software. Most users will never notice it is happening and simply get distortion-free images.

For all there is to like about mirrorless systems – particularly their compact size and light weight – one legitimate area of criticism has been the relatively high cost of many lenses. Aside from a few honourable exceptions, genuinely affordable optics have been in short supply. This is a shame, as adding a lens or two is always the best way to make the most of an interchangeable-lens camera, with fast normal primes at the top of the list of useful additions. 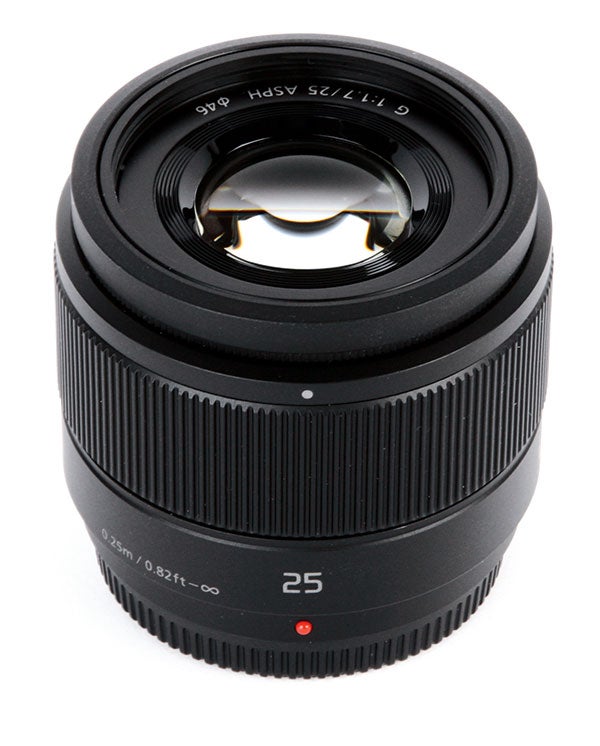 With the Lumix G 25mm f/1.7 Asph, Panasonic has addressed this need with an impressive little lens. It’s decently sharp, handles well, and focuses quickly and silently. Indeed, for the price, there’s very little to complain about at all. Micro Four Thirds users with more money to spend could also consider the Olympus M.Zuiko Digital 25mm f/1.8 or the Panasonic Lumix G 20mm f/1.7 Asph, with the latter being a particularly good choice when small size is required. But for those building up a system on a budget, the 25mm f/1.7 is a great choice.