The HC-VX980EB-K is another great 4K camcorder from Panasonic, with fewer features than the top model but the keener price is more than compensation.

What is the Panasonic HC-VX980EB-K?

The HC-VX980EB-K is the next 4K camcorder down from Panasonic’s flagship HC-VXF990EB-K. It features the same core specification, but lacks a few important capabilities. It’s £150 cheaper, however – although still far from a budget option. Nevertheless, it’s a tempting option if the top model is too costly, and a direct competitor on price to Sony’s FDR-AX53.

The top video mode is Ultra HD, which is 3,840 x 2,160 at 24 or 25fps, with a 72Mbits/sec data rate, and using the MP4 format. Also included is the usual array of AVCHD 2.0 options, all the way up to 1080/50p at 28Mbits/sec. There’s the quarter-Full HD iFrame option too, recorded at 28Mbits/sec. The format options are somewhat bewildering, but you’ll probably be using 4K and one or two of the Full HD modes for much of the time.

The reduced range of advanced features is what differentiates the HC-VX980EB-K from its higher-end HC-VXF990EB-K sibling. The previous generation’s flagship features included items I wasn’t so convinced by, such as the secondary camera on the HC-WX970. However, the HC-VX980EB-K doesn’t have the more expensive model’s electronic viewfinder, fully integrated accessory shoe, or new shooting modes.

So the HC-VX980EB-K lacks the flagship’s cinema-like effects, including the Slow and Quick option, Dolly Zoom, and automated slow zoom. However, there remains one slow-motion option, where you can touch a button three times during a shot to record that section at an increased frame rate, which then plays back at normal speed for a smooth slow motion.

Enabling this feature switched the camera automatically to 28Mbits/sec MP4 mode in Full HD, and it can’t be used when shooting 4K. 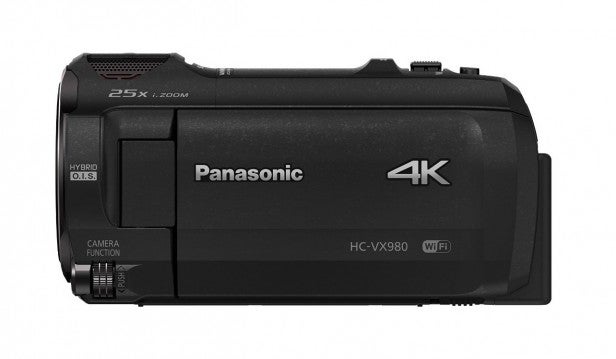 The wireless multi-camera function has also been carried over to this model. This allows up to three smartphones running the Panasonic app to be configured as extra camera angles and you can then choose two of them to be superimposed inside the main image.

This could be great for shooting sports, a gig or other stage-based event, with the Panasonic camera locked off on a tripod and smartphone users doing close-ups.

The mini-jacks for an external microphone and headphones remain. An accessory shoe is available too, but this model reverts back to the slide-in bracket of the previous generation.

The bracket sticks out of the rear of the camcorder, and is more ungainly than the built-in option of the HC-VXF990EB-K. But at least it’s standard sized, rather than the proprietary models found with some manufacturers, such as Sony.

Despite the loss of these headline advanced features, the same set of manual features remain, as is the little wheel next to the lens that will make them easier to access. There’s no lens ring – that appears to have been banished from Panasonic’s consumer-grade camcorders forever. But it’s still better for controlling settings than the touchscreen or a joystick-operated menu system.

Panasonic has always been generous with its manual settings, and with the HC-VX980EB-K it’s no different. There are two Intelligent Auto modes, with the + option providing limited control over exposure bias and colour.

There’s an HDR mode, 11 scene modes including all the usual suspects, and a selection of creative effects. These include a faux tilt-shift Miniature Effect, 8mm Movie, Silent Movie, and Time Lapse with intervals from one second to two minutes. However, the HDR and creative effects can only be applied when shooting in AVCHD format, not when shooting 4K or MP4/iFrame. 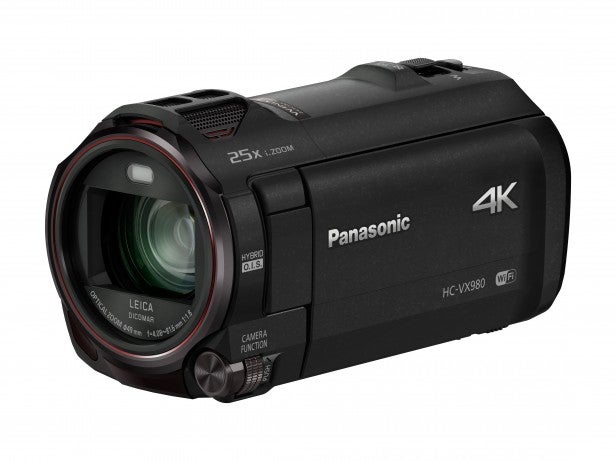 Switching to full manual provides access to focus, white balance, shutter and iris. All of these can either be configured with the touchscreen, or (more conveniently) with the wheel next to the lens.

White balance offers the usual two indoor and two outdoor presets, plus auto and fully manual. The shutter can be set from 1/25th to 1/8,000th, and iris from f/16 to f/1.8, with up to 18dB of video gain available on top of a fully open iris – although this does introduce a noticeable level of grain. When at maximum optical zoom, a fully open iris drops to f/3.6, which is still decent.

One thing that hasn’t changed significantly with this generation of Panasonic camcorders is image quality. The sensor is the same, and as a result the picture performance is pretty much identical.

The camcorder copes well with mixed lighting conditions, and there is of course bags of detail when shooting in 4K. Until a consumer-grade camcorder comes along with a one-inch or larger sensor, this is about the best image quality you’re going to get.

You can see some sample footage shot on the Panasonic HC-VX980EB-K here.

Panasonic’s image stabilisation is still the best around, too, capable of smoothing out quite considerable vibrations whether zoomed in or out. This is one area where conventional camcorders can continue to beat still image cameras shooting video hands-down.

Handheld footage looks super-smooth, and it’s possible to shoot heavily zoomed footage without a tripod and not end up with an unusable, juddering image.

Should I buy the Panasonic HC-VX980EB-K?

The HC-VX980EB-K is another capable 4K camcorder from Panasonic. Although the missing features from the flagship HC-VXF990EB-K are worth having – the EVF, for example – there’s still a huge amount here for the enthusiast and the point-and-shoot videographer. The keener price makes it a more tempting proposition, even if this still isn’t exactly a great-value option.

I regularly have debates with lovers of DSLR shooting about the current crop of camcorders. While digital stills cameras such as the Sony A7R II and Panasonic Lumix DMC-GH4 can shoot great-looking 4K video, neither are as cheap as Panasonic’s 4K camcorders.

Panasonic’s 4K-shooting Lumix LX100 may be more keenly priced, but it has a much more limited zoom range and no microphone input. These cameras also have drawbacks such as 30-minute file limits, and require considerable expertise to operate correctly when shooting video.

With the Panasonic HC-VX980EB-K it’s possible to simply leave it in Intelligent Auto mode and yet still achieve very good 4K video. The image stabilisation in particular is in a different league to any digital stills camera I’ve seen.

But there are still plenty of manual settings available if you do want to be more creative. And that’s why this is a great camcorder, despite not being the large sensor camera-camcorder crossover we’re all still waiting for.

The Panasonic HC-VX980EB-K offers many of the important features that the flagship HC-VXF990EB-K boasts for £150 less, making this a very tempting 4K video proposition.