The Vico-MF1 is the entry-level model in VicoVation’s dash cam range, slotting in under the Vico-MF3 and the Opia 2. Whereas the latter two products offer 1,440p recording, the Vico-MF1 sports a more modest Full HD resolution. But it still houses the well-respected Ambarella A12 chipset inside, which should mean quality is still up to scratch – once the lower resolution is taken into account. 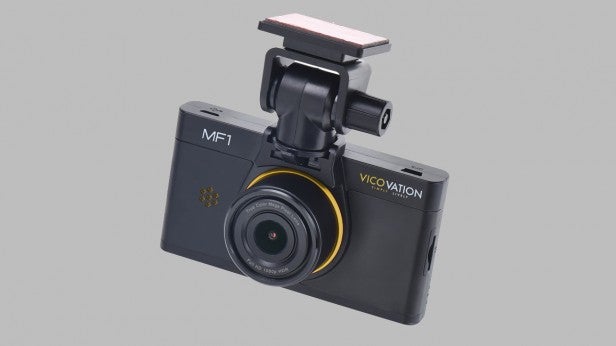 This will be sufficient for the Full HD resolution that the Vico-MF1 offers, at 30 frames/sec. It can also record 720p at both 30 and 60 frames/sec. As stated earlier, the chipset behind the CMOS is still an Ambarella A12, as it is in the Vico-MF3, which is a top-end processor specifically aimed at dash cams. It has done a good job in other VicoVation dash cams I’ve reviewed, so bodes well for the Vico-MF1.

Video is recorded to microSD memory, although no media is included in the box. At the top Full HD resolution, the data rate is around 20Mbits/sec, so a 16GB memory card will be enough for 105 minutes of footage before looping begins – of which more later. This is a decent data rate for H.264 compression – not the highest, but not too aggressive either. 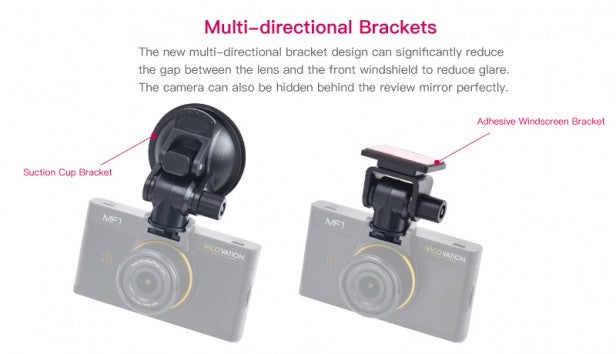 The Vico-MF1 uses the same mounting system as its higher-end sibling. There are two options included in the box. The usual screen suction mount provides a reasonably secure attachment, but for a more permanent solution, there’s an alternative mount. This uses a flat surface and 3M adhesive patch. There’s one already on the mount, and a second included in the box for good measure.

The Vico-MF1 is operated using five buttons on the rear and a 3-inch LCD screen. The top-left button marks the current video file as an event and protects it from being erased during looped recording. Below that sits a button that calls up the menu. On its own, the button on the top-right toggles recording, which begins automatically when the device powers up. The button beneath that toggles the microphone; the one below that controls power. 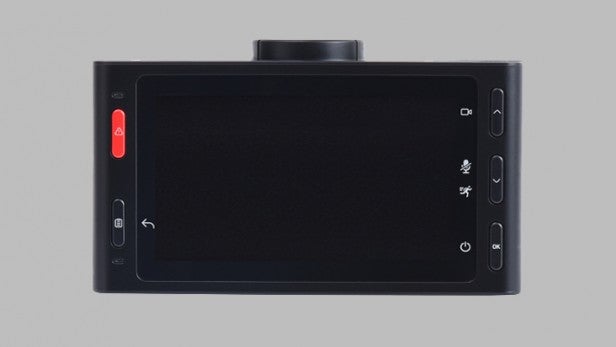 Once the menu has been enabled, the buttons on the right switch functions to control it. Alongside abilities to change video resolution and switch to playback mode, you can enable Smart Warning System features (see below).

You can also choose whether loop recording clips are one, three or five minutes in length (the default is minutes minutes). VicoVation has even included an exposure control that varies between +4 and -4 EV in single increments – so there are nine steps overall. This will be handy if you’re driving in extreme lighting conditions, such as in the dark or very sunny weather.

Neither the Opia 2 nor the Vico-MF3 included built-in GPS, so it would be a surprise if the Vico-MF1 had this on board – and it doesn’t. You can add this capability via an external “GPS Mouse”, which costs £35 and plugs in via a mini-USB port. You can then capture location information alongside the video, although I wasn’t supplied with this Mouse so am unable to comment on how well it works.

The Smart Warning System found in the menu includes Speed Camera Detection, Overspeed Alert and Driver Fatigue Alert. Without the GPS, the Speed Camera Detection doesn’t appear to do anything. The Overspeed Alert lets you choose speeds of 80, 90, 100, 110, 130 and 140 km/h for warnings – although, here again, you’ll need the GPS for the Vico-MF1 to know how fast you’re travelling.

The Driver Fatigue Alert will work without a GPS, although there’s no control over the intervals between which it will warn you to take a rest. There’s a Parking Surveillance system, which detects motion and triggers a recording. The G-sensor has three sensitivity levels, and this can be turned on to detect collisions or sharp breaking, so that the current clip will then be marked as an event. 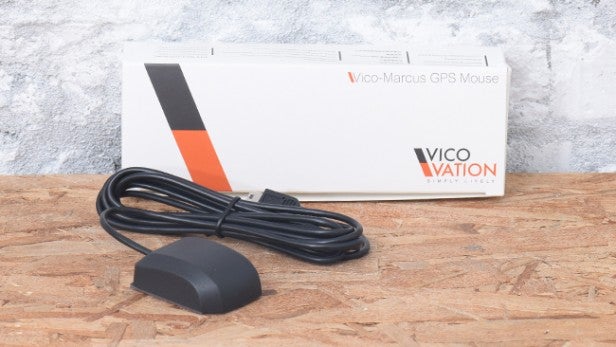 According to the VicoVation website, once the GPS Mouse is installed, alongside position tracking and speed readouts, further features will be enabled. These include a Lane Departure Warning System, where you’ll be notified if you drift out of lane on a motorway, and a Forward Collision Warning System, which will let you know if you’re too close to the car in front. These would bring the Vico-MF1 mostly in line with the capabilities of other dash cams.

Without the GPS Mouse, the Vico-MF1 may not be a winner on features, but one area where VicoVation has always impressed in the past is image quality. The Vico-MF1 mostly keeps up the good work. My main testing was in bright sunlight, and the dash cam coped reasonably well with the high contrast. 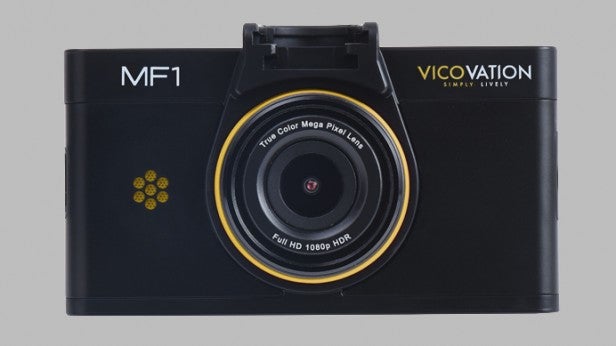 Colours were a little saturated, but still relatively faithful. There’s a noticeable lack of detail compared to the Vico-MF3, due to the lower resolution, but you can still read passing number plates – they just need to be a little closer than with the higher-end models.

You can view a sample of footage from the Vico-MF1 here.

The VicoVation Vico-MF1 lacks some of the features of top dash cam models, but as Full HD dash cams go, its video quality is among the best.

At the time of writing, the Vico-MF1 wasn’t available with UK pricing, but should cost around £120. This makes it quite expensive when budget models such as the Aukey DR-01 can be had for £70. Unless it’s quite a bit less than £120 when listed in the UK, you’d be better off paying the £20 extra for the Vico-MF3 instead.

The VicoVation Vico-MF1 produces great image quality for Full HD, but higher resolution is available for only £20 more from the same company.