If there’s one kind of lens that differentiates professional and serious enthusiast photographers from the crowd, it’s the fast telephoto zoom. With premium optics, these lenses offer top-notch image quality. But typically weighing in at 1.5kg, they require some commitment to carry around, and they’re a major investment too – Canon and Nikon’s versions cost £2000 and £2650 respectively. Naturally, the main third-party lens makers have long sought to offer cheaper alternatives, and Tamron’s latest SP 70-200mm F/2.8 Di VC USD G2 stands up well against the big two at a considerably lower price.

The 23-element, 17-group optical formula includes one element crafted from extra-low-dispersion (XLD) glass, and five from low-dispersion (LD) glass, with the aim of minimising chromatic aberration. Tamron’s eBAND coating is in place to minimise flare and ghosting, while a fluorine coating on the front element makes it easy to keep clean.

Right at the front of the lens you’ll find a 77mm filter thread and the mount for the deep petal-type hood. This clicks firmly into place for use, but – contrary to the current trend – has no locking button to hold it in place. It reverses snugly over the barrel for transport, but in this position it blocks the zoom ring entirely, which hinders getting quick-grab shots.

At 193.8mm long, 66mm in diameter and 1.5kg in weight, the 70-200mm G2 is a sizeable lens, and its solid-feeling metal barrel means there’s little to fault in terms of construction. With a series of internal seals and a rubber O-ring around the lens mount, Tamron describes the lens as ‘moisture-proof and dust-resistant’, and during the course of testing I used it in rainy conditions with no trouble at all.

Towards the front of the barrel is the zoom ring, which has a ridged rubber grip. It rotates noticeably less smoothly than those on the Canon and Nikon equivalents, which means that it isn’t quite so easy to make fine adjustments to your compositions. Behind it is a narrower and more finely ridged focusing ring, with a small window on the top of the barrel indicating the current focus distance. Both zoom and focus are internal, so the lens’ balance in the camera doesn’t ever change while you’re shooting.

On the side of the barrel you’ll find four switches to control the autofocus and stabilisation systems. Along with the usual AF/MF control, there’s a focus limiter that restricts the closest focus distance to 3m – useful to reduce hunting when shooting distant subjects.

Another switch turns stabilisation on or off, while the fourth selects between the three VC modes, with the central of the three clicked positions being easy to select. All aside from the focus limiter use the same physical design, so while they’re large and easy to operate, they’re not distinguishable by touch alone when you’re looking through the viewfinder.

The supplied tripod mount ring has the standard 1/4in socket, but in a ‘why can’t everyone do this?’ moment, it’s also equipped with a dovetail base that fits directly onto Arca-Swiss style quick-release clamps.

Its low-profile design means that it won’t occupy excessive space in a bag, and it can also be removed entirely if necessary. As usual the lens rotates within the ring, allowing the camera to be set to portrait format quickly and easily. About the only possible criticism is that it doesn’t click into place at the standard 90-degree positions; instead you have to visually align small white dots.

When testing its ability to follow moving subjects on the Canon EOS 5D Mark IV, I got the impression that it was capable of doing practically whatever the camera asked of it, keeping fast-moving subjects impressively sharp once it had initially acquired focus. I think most users will be happy with its capabilities for normal viewfinder shooting.

The lens also works well with Canon’s Dual Pixel AF for Live View and movie shooting, being capable of smooth, controlled focus pulls from one subject to another, with little in the way of motor noise.

Manual focus is mechanically coupled, and while the focus ring may be a little less silky compared to more expensive lenses, I had no difficulty achieving accurate focus. Full-time manual focus is available, meaning you don’t have to switch to MF mode if you need to temporarily override the autofocus.

The lens focuses as close as 0.95m, which is pretty much best in class. However, its specified maximum magnification of 0.16x is actually a little lower than Canon and Nikon’s offerings due to focus breathing effects (in other words, the angle of view getting wider as the lens is focused closer).

Tamron has provided optical image stabilisation via its Vibration Control (VC) system, promising up to five stops of compensation for the blurring caused by camera shake when hand-holding at slower shutter speeds.

Examining the small print reveals that this is only achieved when the lens is set to VC mode 3, in which the viewfinder image isn’t stabilised. This is in contrast to mode 1, which stabilises the viewfinder and allows for more precise composition and potentially more reliable autofocus, or mode 2 that automatically detects panning motion and only stabilises shake along the perpendicular axis.

Tamron has historically been good at image stabilisation and this lens follows suit, with the viewfinder locking to an uncannily stable view when the shutter button is half-pressed in mode 1. But you do need to bear in mind that it’s a heavy beast, and you’ll probably need to select relatively fast shutter speeds compared to a lighter lens if you’re after pixel-level sharpness, especially when paired with a high-resolution sensor.

I found that with VC mode 1, I could reliably get pixel-sharp shots handheld at shutter speeds as low as 1/30sec when shooting at the 200mm end and 1/8sec at 70mm, but the system’s effectiveness dropped off rapidly at slower speeds. This still counts as around 4 stops worth of stabilisation in my book, making it a match for other stabilised 70-200mm f/2.8 zooms in real-world use.

Switching to mode 3 gave an increased probability of getting sharp shots at even slower shutter speeds, with some usable shots at 1/8sec at 300mm and 1/4sec at 70mm. This is certainly worth having, but most of the time I’d prefer to stick to mode 1 with its clear operational advantages.

To compete with its Canon and Nikon equivalents, a lens such as this needs to deliver exceptional image quality, and for the most part that’s exactly what it does. It’s impressively sharp, with the only slight weakness of our review sample being when shot wide open at 70mm. Vignetting is about what I’d expect from this kind of lens, and distortion is so low as to be practically irrelevant.

A little colour fringing can be seen around high-contrast edges towards the frame due to lateral chromatic aberration, but it’s only visible when viewing images at the pixel level on-screen, and can be eliminated by a simple one-click correction in raw processing. Canon cameras don’t support in-camera lens corrections with third-party lenses, but Nikon DSLRs will automatically correct this kind of chromatic aberration in their JPEG output.

Out-of-focus backgrounds are generally rendered with a pleasing blur, and while the blur discs from point highlights can acquire a bright-edged character when the lens is focused close, it isn’t excessively displeasing. The lens’ flare resistance is very impressive indeed, even when pointed directly into the sun.

In short, from the hundreds of real-world images I shot while testing the lens on the 30-megapixel Canon EOS 5D Mark IV, I didn’t find any obvious problems that would prevent me from recommending the lens.

On the Canon EOS 5D Mark IV, the lens delivers fine MTF results from our Image Engineering tests. If there’s any kind of flaw, it’s a degree of softness wide open at 70mm – especially at the corners of the frame; but in real-world images this wasn’t much of a practical problem. At all other settings it delivers plenty of detail, with the very best results across the frame obtained at around f/5.6 – f/8. 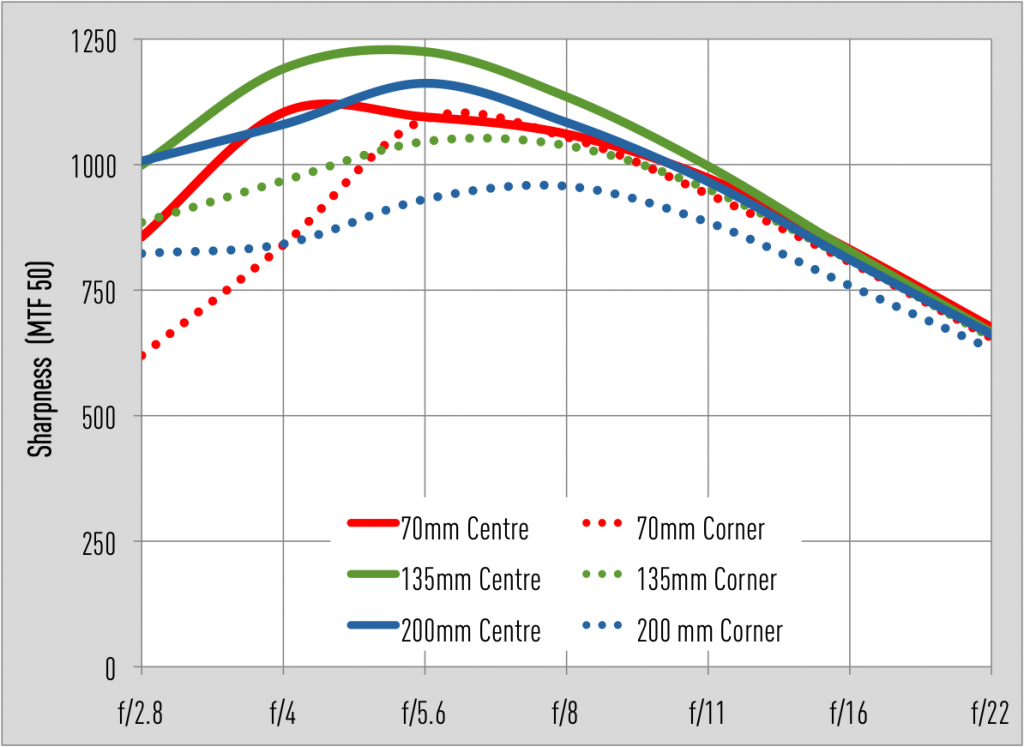 Vignetting is far from severe, with a maximum of 1.2 stops drop in illumination in the image corners wide open at 200mm. However, the fall-off pattern is quite gradual across the frame, meaning it shouldn’t be too visually intrusive. At 70mm the level of vignetting is lower, but it’s more abrupt into the corners. At all focal lengths, stopping down to f/4 reduces fall-off to 0.6 stops or less.

Typically for a telephoto zoom, the Tamron shows slight barrel distortion at 70mm, turning to pincushion distortion as you zoom in past 100mm. But it’s rather mild, and unlikely to be a problem for the majority of subjects this lens will be used for. It can be readily fixed using in raw processing using profiled lens corrections.

When Tamron relaunched its SP lens line towards the end of 2015, it signalled its intent to move more towards the premium end of the market. With the latest G2 version of its 70-200mm f/2.8, it has come up with a very serious contender in the fast telezoom category.

The lens’ excellent optics are complemented by fast autofocus, effective image stabilisation and impressive weather-sealed build quality. Indeed, it gives up little compared to its pricier rivals from Canon and Nikon. Perhaps it isn’t quite as operationally refined in some respects, but that’s easily forgiven for the price. Overall, this is one of Tamron’s finest lenses yet.

If you’re an enthusiast photographer looking for a high-spec telezoom at a competitive price, the SP 70-200mm F/2.8 Di VC USD G2 is a great choice, and a serious alternative to its more expensive Canon and Nikon counterparts.