We have it in our heads that 50mm is the standard focal length for 35mm format, and it has been for years. The rule is that the length of the diagonal of the frame, of film or sensor, is the focal length with the ‘normal’ angle of view, and that’s what makes our standard focal length. If you have a ruler it’ll take you a minute at most to work out that the diagonal of the 35mm frame, and that of a full-frame sensor, is just over 43mm.

So why do we use 50mm as a standard? Well, it doesn’t really matter, but the maths does explain why Tamron is touting this unusual focal length as a standard for full-frame users. The company isn’t the first, either, as Pentax offers a rather nice 43mm f/1.9, and has done for some time. What makes the Tamron example special, in my eyes at least, is that it’s a bit faster than the Pentax and, more importantly, it’s a fixed-focal-length lens from a company that has been obsessed with producing zooms for as long as I can remember.

In my youth the Tamron 90mm macro was legendary and it has remained a firm favourite ever since in all its modern incarnations. But the company seemed not to be interested in considering other focal lengths for fixed lenses, preferring to build more and more zooms for the mass market. The change came with the new f/2.8 zooms – the 24-70mm first, followed by the 70-200mm and 15-30mm. These lenses – priced highly and performing accordingly – marked a step change in quality for the company with new designs, new stabilisation and new drive motors, as well as the intention of reaching a new market. I’ve badgered Tamron myself about fixed focal lengths, as Sigma has gone from strength to strength with its premium optics, and finally it seems the plunge has been taken.

The Tamron SP 45mm f/1.8 Di VC USD uses ten elements in eight groups in its construction, including one low-dispersion element and two moulded-glass aspherics. These are designed to reduce chromatic aberrations and to ensure square objects arrive looking square at the sensor. When used on a full-frame camera we benefit from a 51˚ angle of view, while APS-C sensor cameras will get just 34˚ of the coverage, which will deliver a similar impression to that of a 68mm lens on a full-frame system. With an f/1.8 maximum aperture Tamron can boast that its lens is slightly faster than Pentax’s 43mm lens, but it’s only just as fast as the average 50mm standard lens, and not as fast as the premium f/1.4 and f/1.2 models that already exist.

Special features that make this lens more remarkable include its nine-bladed iris, which should help to maintain a rounded entrance hole as the aperture is closed down, and a closest focusing distance of 29cm. Canon and Nikon standard lenses use either seven or eight blades in their apertures, and tend to have closest focus distances of 35-45cm. While more aperture blades in an iris is no guarantee of more attractive highlights, I’ve found it is a significant indicator and really helps when the lens is closed only a stop or two from the maximum setting – which is where the prominence of out-of-focus highlights will be strongest.

Traditionally, image-stabilisation systems have been reserved for longer focal lengths, with the requirement to maintain a steady image more obvious with that greater magnification. Tamron’s inclusion of its VC (vibration compensation) system in this short focal length is not to compensate so much for the magnification of the lens, as to allow handheld photography in lower-light conditions without the need to increase noise through higher ISO settings. And that is genuinely useful.

Tamron’s answer to Nikon’s Silent Wave Motor, Canon’s Ultra Sonic Motor and Sigma’s Hyper Sonic Motor is its Ultrasonic Silent Drive motor (USD). This, in common with other such systems, aims to shift the focusing elements of the lens quickly and silently so focus can be achieved as fast as possible.

I’m pretty impressed with the quality of images this lens produced. I value wide-aperture sharpness and am pleased to say that although the lens doesn’t perform at its best at f/1.8, it’s still very good and sharpness is more than acceptable. It’s no surprise that resolution is better in the centre by f/4 and that the edges catch up by f/8, before things soften off a little from f/11 to f/16. Throughout the aperture range, though, the lens produces nice sharp images, and at no point did I notice softness that I found unacceptable.

The benefit of the nine-bladed iris is easily seen in images shot between f/2 and f/4. Highlight orbs are nicely rounded and evenly illuminated, and they remain mostly circular close to the edges of the frame. This is a very pleasant characteristic, especially for those who like to shoot wide open to create a non-distracting backdrop for their subject.

Vignetting seems reasonably well controlled beyond f/2.8, although it is more than noticeable in flatly lit subjects when the lens is wide open. I rather like the effect, but it is a fault nonetheless – though not one that destroys images. More pleasing is the lack of chromatic fringing in images taken at all apertures. When inspected at 100% some cyan/green separation is visible along high-contrast edges, but you do need to look that close to see it. A click of the auto-correction button in Capture One Pro soon makes it disappear. As the iris closes, the fringing slips away and none can be seen when best sharpness is required around f/5.6-8.

The VC proved its worth in low-light situations and, helped by the usability of the f/1.8 aperture, I was able to avoid racking up the ISO as often as I might have done otherwise. However despite the assistance of the USD motor, I didn’t find the AF especially speedy, and have a number of pictures of moving people who have the focus on the back of them, not the front.

If you were expecting a 45mm lens to be reasonably compact you’ll need to think again. This is quite a beast, and looks more than at home on the equally beastly Canon EOS-1D X. I was surprised by its size, I have to say, but a lack of miniaturisation is often compensated for by the space given to a design that creates better quality images. The lens feels very nicely made and is finished in a smooth semi-matt metal paint with a fine-rib focusing ring. In all, it’s a rather good looking piece of equipment with a serious air about it. 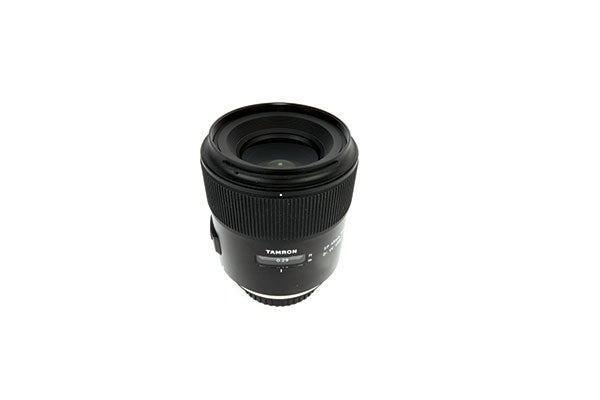 When in use, a pair of switches falls beneath the thumb of the left hand. These take an effort to flick back and forth so it is unlikely that you’ll deactivate the VC system by accident or find you’re in manual-focusing mode when you last left the lens set for AF. The switches are housed in a raised platform so they are easy to find, and once you remember which does what you’ll be able to operate without taking your eye from the finder. The focusing-ring action has just enough resistance and despite the wide range of focus distances that are covered it takes only 180˚ of rotation to get from 29cm to infinity. A window on the top of the barrel lets you see a focus scale, should you not be able to look through the viewfinder, but it’s worth noting there’s no depth of field indicators or infrared markings with it. 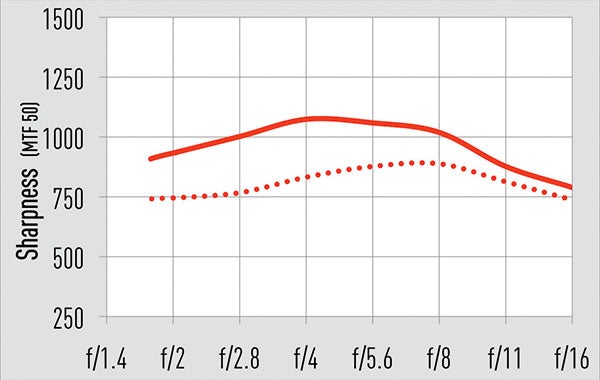 Resolution is pretty good at all aperture settings and, while of course corners and the centre get better as we close down, I was pleased with the amount of detail gathered at f/1.8. The best overall aperture is f/4, with the corners catching up by f/8, but sharpness tails off from f/11. It is interesting to see that wide-open resolution is better than when the lens is fully closed. 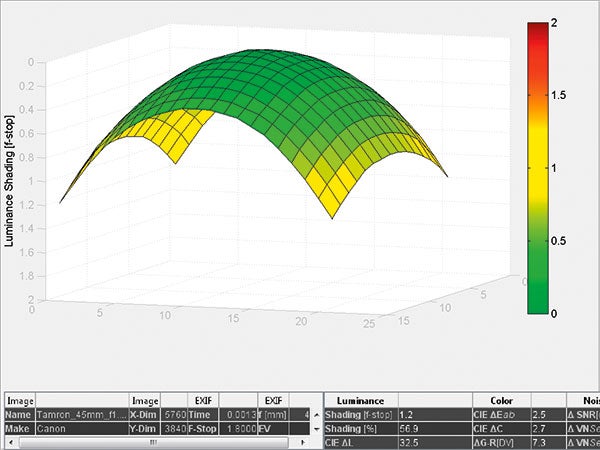 Shading is quite visible at the widest couple of settings on this lens, but that is to be expected. It is rather nice, in fact, so long as you aren’t being scientific. There’s a maximum of 1.2EV fall-off of brightness in the corners at f/1.8,  which diminishes progressively on stopping down. Most of us will consider it gone by f/2.8, although f/4 will suit the more picky. 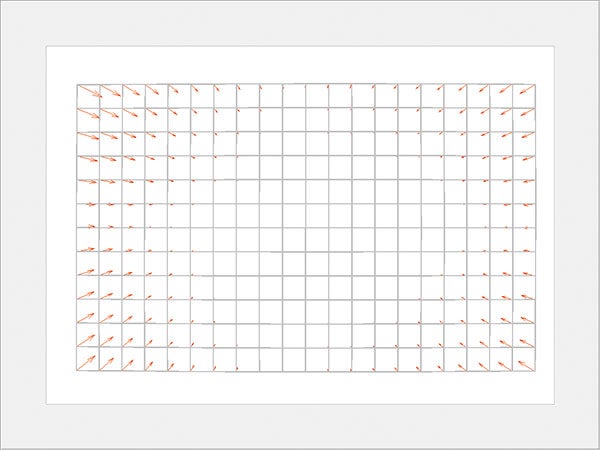 There isn’t really a great deal of curvilinear distortion to speak of, with just a hint of barrel-type curvature of straight lines along the edge of the frame. It will be more pronounced when using the lens at its closest focus distance, but for larger scale subjects it will hardly feature. The correction is very well managed, making the lens flexible in use.

Tamron used to have a reputation for being a cheaper alternative that perhaps wouldn’t deliver quite the same quality as the top brands. That image has changed somewhat in the last few years, and this lens is another example of what the company can do when it wants to.

This isn’t a cheap lens, especially when you consider older 50mm f/1.4 designs can be had for around £300, but by concentrating on quality and useful features the company has made a lens that offers very good value. The focal length makes it stand out, but so does the VC, the standard of the iris and the closest focusing distance. And when you look at your images, you’ll be pleased with the controlled chromatics and the overall sharpness. Its build is rather heavy, and I would prefer it all in a smaller, lighter package, but I suppose that’s the pay-off for quality. You just can’t have it both ways.