Generally speaking, we expect long telephoto zooms to be large and cumbersome. Last year, however, Sigma bucked this trend with the announcement of the 100-400mm f/5-6.3 DG OS HSM | C. It was designed for keen amateurs and aspiring enthusiasts who want to get close to distant subjects, but without having to splash out more than £1000 for the privilege.

The Sigma 100-400mm f/5-6.3 DG OS HSM | C became an instant hit, both with its intended audience and full-frame users who liked the idea of owning a lightweight and versatile telephoto zoom for travelling and general use.

Since then, Tamron has launched its own variant in the form of the 100-400mm f/4.5-6.3 Di VC USD, with the concept much the same as its Sigma rival. But with only subtle differences between the two, which is the best choice? 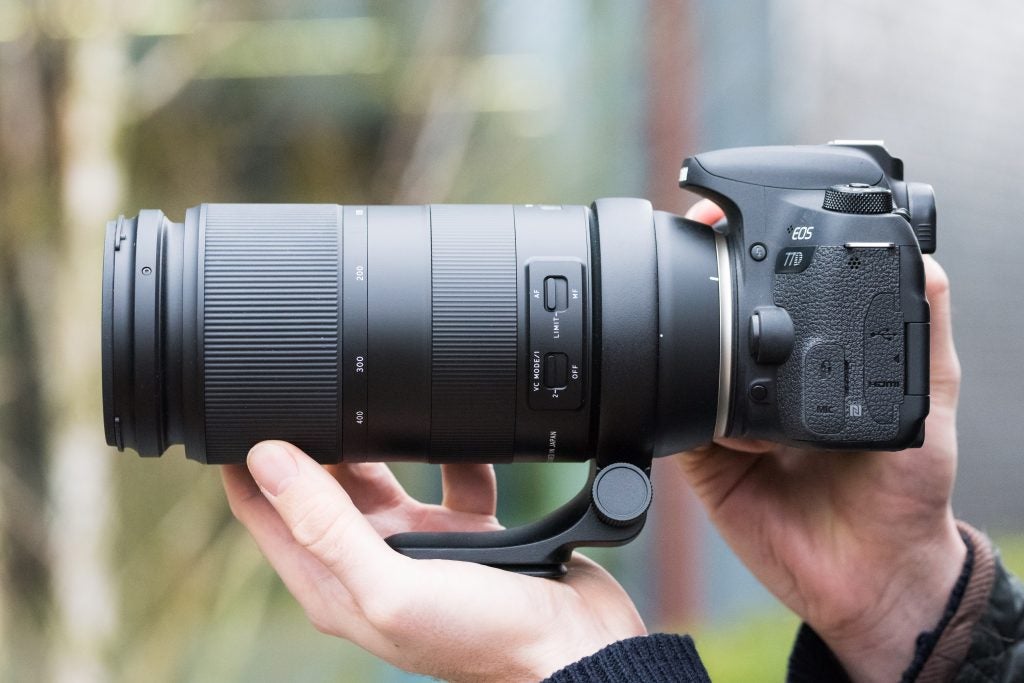 The barrel is noticeably thinner than the aforementioned zooms and it weighs around half a kilogram less. As a result, it puts considerably less strain on your body when it’s carried as part of your kit or slung over the shoulder. 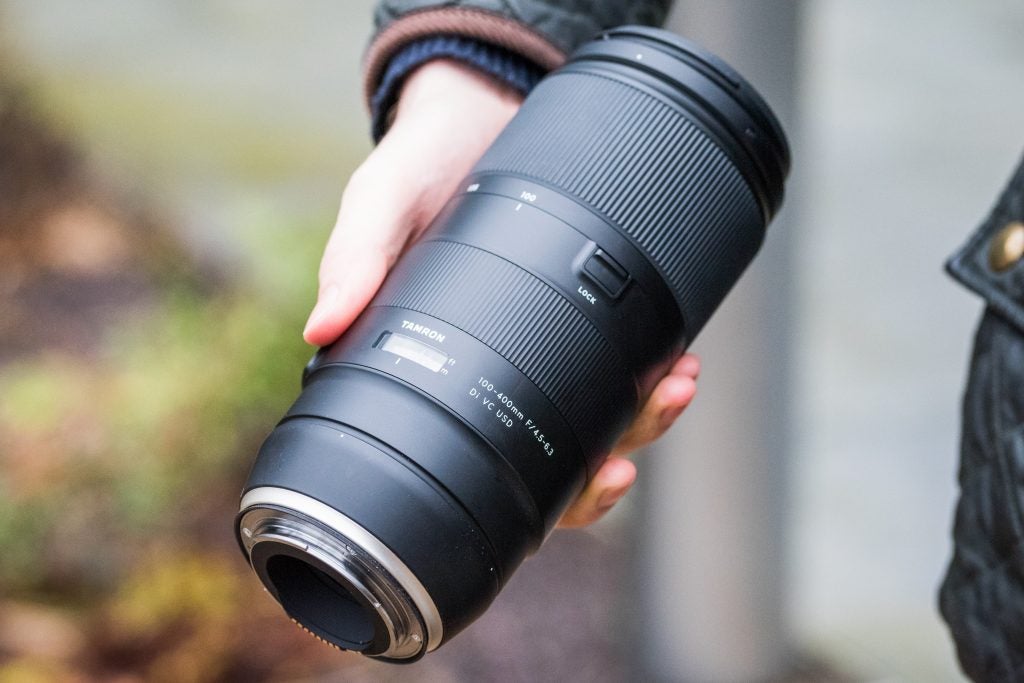 Precise autofocus and optical image stabilisation are essential to the performance of a telephoto zoom lens, and this optic provides both.

This, combined with the fine-tuning of the enhanced control algorithm, provides a level of stabilisation that allows users to shoot using shutter speeds four stops slower than would otherwise be possible. 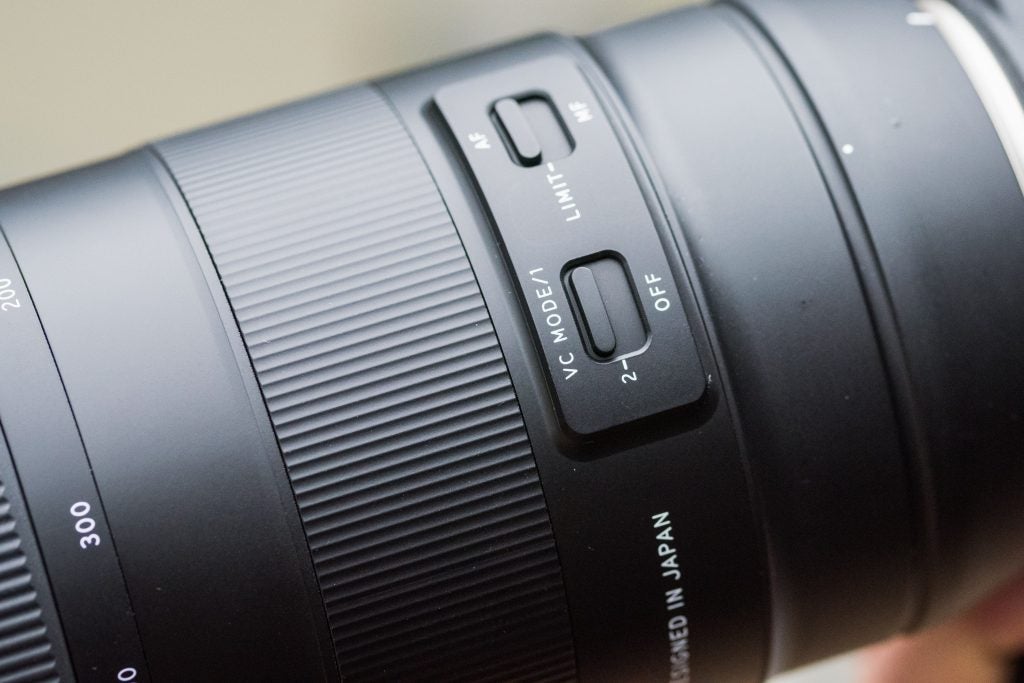 The optical formula isn’t as complex as its Sigma rival. It features 17 elements in 11 groups as opposed to 21 elements in 15 groups. Three low-dispersion (LD) glass elements are relied upon to control optical aberrations, and Tamronʼs proprietary eBAND (Extended Bandwidth & Angular-Dependency) coating is used to prevent reflections and produce clear, vivid images.

The nine-bladed circular diaphragm closes down to a minimum aperture of f/32 at 100mm (f/45 beyond 290mm) and it has a minimum focus distance of 150cm with a maximum magnification ratio of 1:3.6. 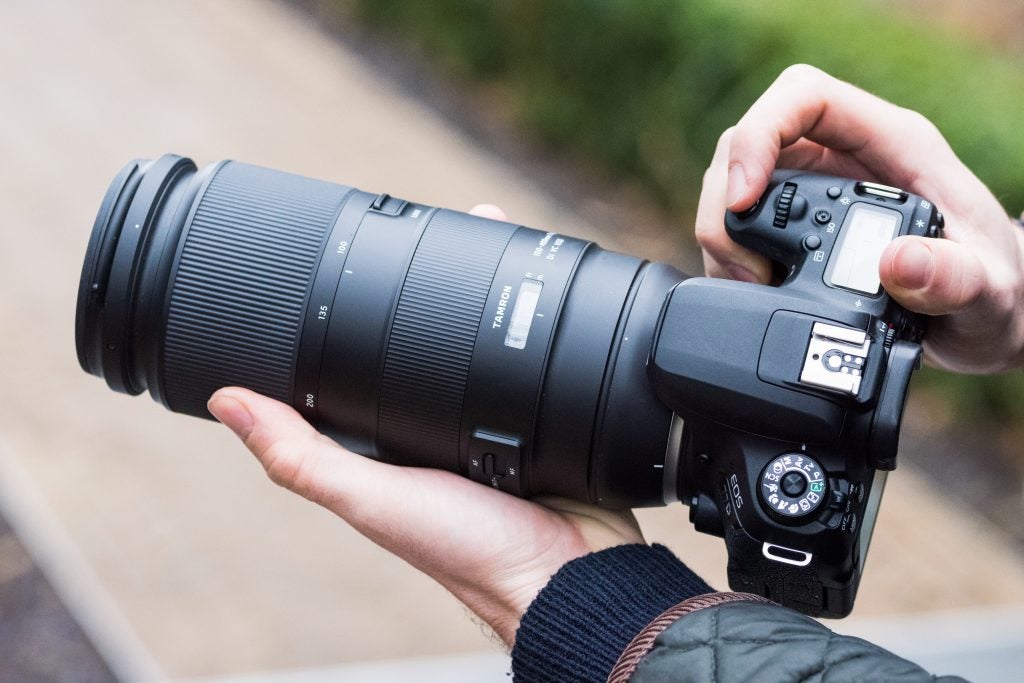 Available in Canon or Nikon mounts, the lens accepts filters and adapters via a 67mm thread at the front. It’s also fully compatible with Tamron’s TAP-in console, which provides a USB connection to your computer. This enables users to easily update the lens’ firmware when required, as well as customise and fine-tune the AF and VC.

As part of the boxed contents you get a nicely profiled plastic lens hood and lens caps. Annoyingly, the tripod mount is an optional extra. It adds £109 to the cost of the lens, which seems excessive when we’re so used to having one included at no extra cost.

The appearance of the lens conforms to the styling of Tamron’s premium G2 lenses. The metal barrel is presented in an attractive matte-black finish, with easy-to-read lettering and numbering standing out in white. 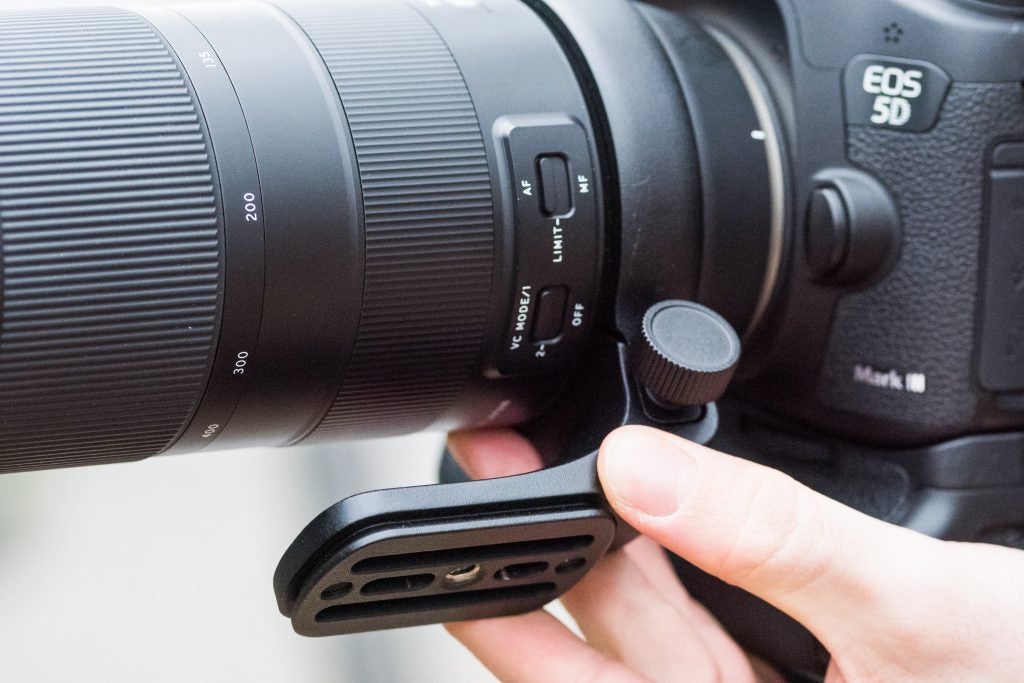 From the metal lens-mount looking forwards, the barrel tapers outward slightly before it reaches its maximum diameter, just beyond where the optional tripod collar attaches.

Ahead of this, there’s a focus distance window, with large and positive focus and vibration-compensation switches offset to the side. Both switches have three settings, with the limit setting in-between AF and MF being useful when you’d like to restrict the closest focus distance to 7m and reduce hunting when shooting distant subjects.

The VC switch can be set to Mode 1 to compensate for handshake related to general photography, or Mode 2 for panning with moving subjects. Alternatively, it can be turned off when the lens is fixed on a tripod or mounted to a support. 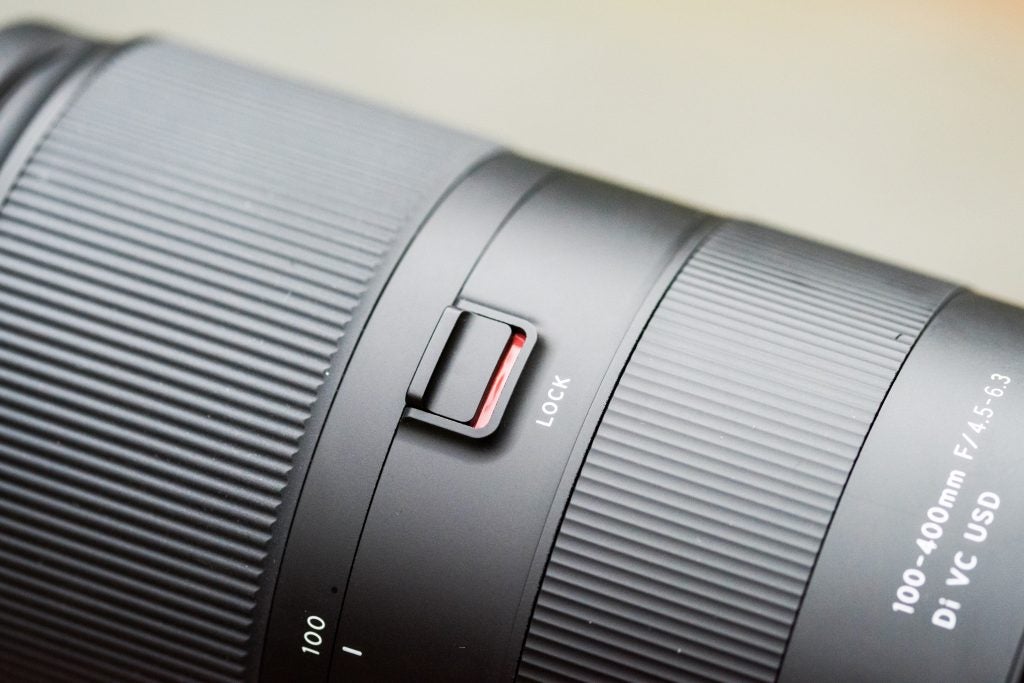 Further down the barrel there’s a plastic-ribbed manual-focus ring that operates fluidly with just the right level of resistance for fine focusing adjustments. Ahead of it is a large rubberised zoom ring that benefits from a zoom lock off to the side. This keeps the focal length locked at 100mm for storage and transportation purposes.

Our sample didn’t show any sign of zoom creep, and consistently extended from wide to full telephoto lengths smoothly. Its Sigma rival requires just a touch more effort at the long end of its focal range. 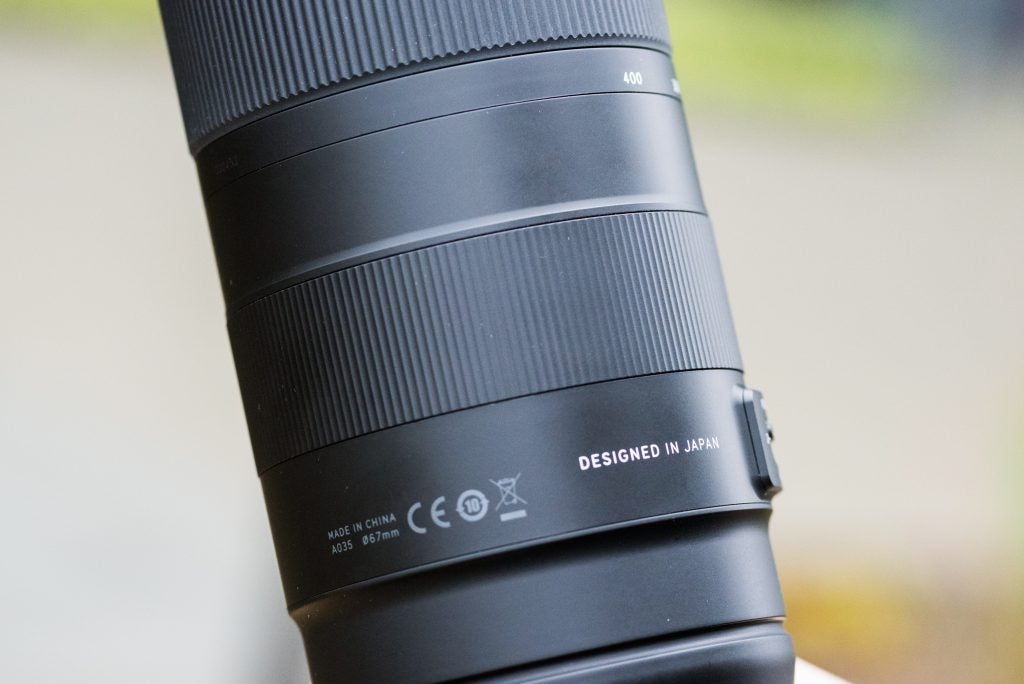 The zoom ring is rotated anti-clockwise to zoom in and the throw of the zoom is such that it’s a two-stage process to get from 100mm to 400mm. As with the Sigma 100-400mm, it can be extended quickly by pushing the lens hood away from the camera. That said, it lacks a ridge at the rear of the hood, making it less easy to retract, especially when working with gloves in cold weather.

The lens’ moisture-resistant construction and a fluorine-coated front element provide extra reassurance when subject to harsh conditions. Overall, it’s a very well-designed and constructed lens that handles commendably on whatever DSLR it’s coupled to. This may be a small APS-C DSLR such as the Canon EOS 77D, or a full-frame model such as the Canon EOS 5D Mark III.

The advantage of pairing the lens with an APS-C DSLR is that it allows you to shoot closer to distant subjects. To get a clear understanding of how it performs across its full image circle however, it was coupled to a full frame DSLR for our stringent lab tests.

Results at the wider end of the zoom show that there’s an improvement in centre and corner sharpness by stopping the lens down from its maximum aperture to f/8. Sharpness figures at the edge at full telephoto aren’t as high as those recorded at 100mm or 200mm. However, centre sharpness at 400mm is very impressive, peaking between f/8-f/11.

Ultimately, to get the best out of the lens at any given focal length, it’s best to use it around f/8. There’s the option to stop the lens down and shoot at apertures smaller than f/22, but as you begin to encroach f/16, you’ll begin to notice a loss of sharpness in images due to diffraction.

As the test shot of St Paul’s Cathedral illustrates, vignetting is evident when the lens is used at its maximum aperture on a full-frame DSLR, both at wide and full telephoto lengths. Corner shading becomes less obvious when the lens is stopped down to an aperture of f/8 or beyond.

On crop-sensor cameras, only the central portion of the lens’ image circle is used. As such, corner shading is noticeably less severe when it’s used on an APS-C camera at its maximum apertures.

I was left very impressed by the way the zoom controls chromatic aberration, with virtually no green or purple fringes of colour being observable along high-contrast edges.

Pincushion distortion is greater at 400mm than it is at 100mm, but this along with the vignetting at wide apertures is a one-click-fix by placing a tick in the Enable Profile Corrections box within the latest updated versions of Lightroom CC or Camera Raw.

Testing also incorporated a few outdoors tests to measure the effectiveness of the Tamron’s vibration compensation system in real-world use. With VC Mode 1 setup, and the foot of the tripod collar resting in the palm of my hand, I had no difficulty capturing sharp handheld shots at around 1/15sec at 100mm. At full telephoto I achieved consistently sharp handheld shots at 1/80sec.

Our Image Engineering MTF tests reveal that the lens is sharpest at maximum aperture at the wide end of the zoom. At 400mm, centre sharpness sees a considerable improvement by stopping down from f/6.3 to f/8.

Corner sharpness figures at 400mm aren’t as high as they are at 100mm or 200mm, but this isn’t enough to put you off using the lens at the end of its zoom range. Shoot close to f/8 and you’ll resolve the best optical quality that the lens has to offer.

On an APS-C DSLR such as the Canon EOS 77D, only the central portion of the lens’ image circle is used. This means the lens exhibits less vignetting than when it’s coupled to a full-frame camera.

Pair it with a full-frame DSLR and you can expect corners to appear considerably darker than the centre at all focal lengths at its widest apertures. To reduce the affect of vignetting, users can stop the lens down to f/8, or remove it easily post-processing by applying the relevant lens profile.

Pincushion distortion was measured at 0.7% at 100mm and gradually becomes more noticeable the further the zoom is extended, with horizontal and vertical lines on the test chart bowing inwards from the edge to the centre.

The good news is that pincushion distortion can be fixed easily by applying the relevant lens profile in up-t0-date versions of Lightroom CC or Adobe Camera Raw.

Its size, build quality and performance suggests it will be more of a hit with amateurs and aspiring enthusiasts using APS-C DSLRs than with full-frame DSLR users. However, I wouldn’t disregard pairing it with the latter when a smaller and lighter tele-zoom is preferable.

The only thing full-frame users will want to take note of is applying lens corrections in post – a must to get around the issue of heavy vignetting at the edges when it’s used at wide apertures. 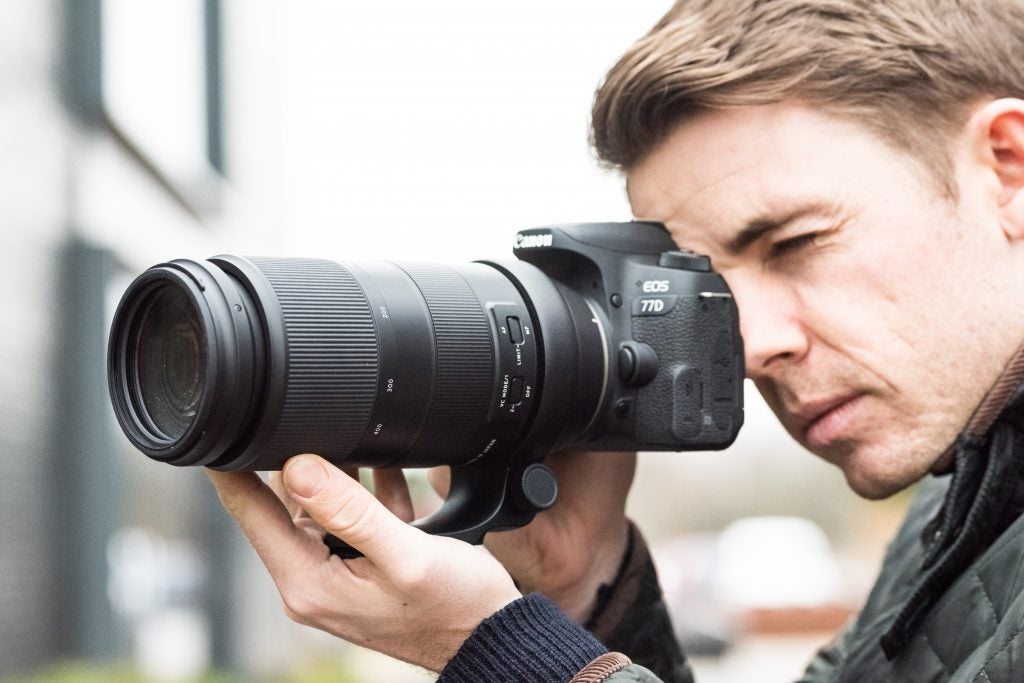 Sigma missed a trick with its lens by not equipping it with a tripod collar. Tamron hasn’t made the same mistake and the optional tripod collar with arca-swiss compatibility is essential if you’d like to mount it to a tripod.

It’s £199 more expensive than its Sigma rival with the tripod collar included, but I’d say this is worth paying for better support and stability midway down the barrel.

Overall, this Tamron lens is a fine example of a third-party zoom that delivers good image quality across a broad telephoto range. Add its quiet autofocus performance and effective vibration compensation system to the mix and it’s a lens that’s well worthy of its high recommendation.