The Sony a6100 is an entry-level mirrorless camera that is highly compact and crammed with cutting-edge technology. The Sony a6100 is created to deliver strong all-round performance in both photography and video.

The a6100’s 24.2-megapixel APS-C sensor is the same that featured in its predecessor, although this is a newer generation, paired with a more powerful Bionz X image-processing chip. The updated sensor and processor combo means the a6100 performs better in low light compared to the a6000, and can now capture up to 4K/30p video. The a6000 can only capture Full HD video.

As a APS-C sensor-sized camera, the a6100 has many advantages over smartphones and pocket cameras. Firsty, a larger sensor will typically deliver better low-light performance. This is because it has larger photosites, which are able to gather more light. The camera also has access to a wealth of Sony E-mount lenses, making it a far more adaptable camera that can handle everything from sports and wildlife, to street photography and portraiture. 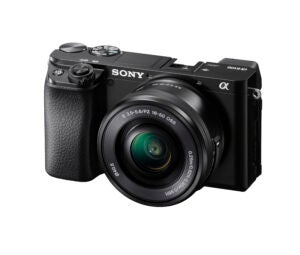 Measuring just W120 x D59.4 x H66.9mm and weighing 396g body-only, the a6100 takes up very little space in a bag. It even slips into coat pockets with relative ease. The advantage of such a small camera body is you’ll feel comfortable taking it practically anywhere. Although it doesn’t have a weather- or dust-resistance rating, you’ll still want to take care with it. The body itself is made from a tough polycarbonate plastic, yet it doesn’t feel flimsy in any way, despite its size.

There are very few changes to the design of the a6100 compared to its predecessor. Sony has very much taken an “if it ain’t broke, don’t fix it” approach. So if you’re looking at the two units side by side, it may be difficult to tell the difference. However, when it comes to how the two handle, there is a noticeable difference. This is because Sony has given the a6100 a more substantial grip, which makes holding the camera far more comfortable, particularly when using heavier or longer telephoto zoom lenses.

The rear of the a6100 looks a little less busy, but the button layout remains unchanged. The majority of the controls are crammed to the right of the camera, where your thumb rests, including the mode and control dial. Less-experienced users may find the numerous signs and symbols around the buttons a little intimidating – and things don’t get any easier if you’re unfortunate enough to have to delve into the a6100’s menu system; it’s a labyrinth. 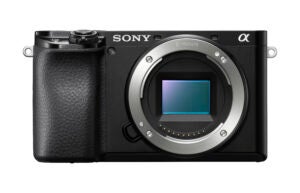 Fortunately, the a6100 has a tilting 3-inch touchscreen, which makes changing settings a little easier. Although for some reason, touch functionality is disabled when using the menus, which is unfortunate. If you go for this camera, I’d strongly recommend you spend some time setting up the camera to the way you want it. It’s highly customisable, which is great. It just takes a fair bit of tinkering to get it operating intuitively.

I love the flexibility of the Sony’s bodies in general, and the a6100 is no exception. It offers full manual controls, and once it’s configured to taste, you won’t have to explore its menus too often to make adjustments.

The a6100’s 3-inch touchscreen has a resolution of 921k-dot, which is the same as the a6000. However, this time, the camera’s screen can tilt 180 degrees to face forwards. This is a welcome update and makes taking selfies and recording vlog content significantly easier.

It also has a video-friendly 16:9 aspect ratio, which is great for composing and monitoring videos or 16:9 photos. But full resolution images on the a6100 are 3:2 aspect ratio, which means there are black bars either side of the frame. Full-resolution images don’t fill the screen when composing or reviewing them, so you’ll need to wirelessly transfer them to your phone via the capable Sony Imaging Edge app to enjoy their full glory on-the-go. 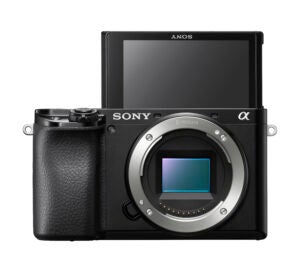 Most entry-level cameras feature touchscreens these days. This makes it easier to change settings while taking pictures or recording video. Functions such as tap-to-focus can be super-handy, especially when selecting a target to track. You can also pinch-to-zoom when reviewing your pictures in playback mode. But for some odd reason, the touch functionality is disabled when navigating the camera’s menus. Many other cameras offer this, so it seems to be a quirk with certain Sony camera models.

There’s also the option of composing your images through the a6100’s built-in electronic viewfinder (EVF). It’s the same EVF featured in the a6000, so don’t expect to be blown away by its 1cm size and 1,440k-dot resolution. Competitor cameras are ahead of the a6100 in terms of EVF, offering at least 2,360k-dot EVFs.

By making savings in areas such as the EVF and LCD resolution, Sony can afford to include technology from the a6100’s higher-end stablemates. Most significantly, the advanced 425-point phase detection autofocusing system that’s borrowed from the a6400. This AF system is a huge step up from the a6000, and perhaps the most compelling reason to spend the extra money if you’re weighing your options.

There are numerous AF modes with which to experiment, but if you venture into the menu, you can turn on tracking with an expanding flexible area. I found this to be the most effective all-round AF option and one that will suit the majority of subjects. The a6100 also enjoys Sony’s award-winning Eye AF functionality, which can detect eyes as well as faces. This applies to animals too. 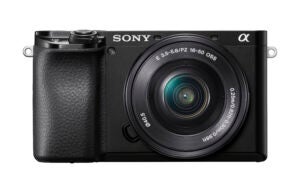 Burst mode shooting of up to 11fps is carried over from the a6000, and although most people won’t need it, the 60-70 image buffer of the a6100 is at least double that of its closest rival, the Canon M50. If you want to capture fast-moving subjects, the a6100 is more than capable of keeping up.

Entry-level cameras today are light years ahead of the flagship cameras that came before them. My first ever enthusiast Sony camera only had a 10.3-megapixel sensor and 5 focus points, and I took professional shots with that. Armed with a 24.2-megapixel camera and 425-phase detection autofocus, there are no excuses for not nailing beautiful images and videos.

I’d recommend picking up the a6100 body-only and spending a little extra on a lens or two separately. It’s also worth noting that you can purchase the affordable Sigma MC-11 adapter, which will allow you to use all of the amazing Canon/Sigma EF-mount lenses that are out there, too. Even with the adapter, AF performance is excellent and the picture and video quality is worth the extra spend.

With an improved ISO sensitivity range, the a6100 captures usable shots at up to ISO 3200. This is handy for low-light conditions when you don’t want to use its pop-up flash or drop the shutter speed too much. The a6100’s 24.2-megapixel sensor captures 6000 x 4000 pixel images that will produce beautifully detailed prints at up to A2 size. This is more than enough for most photographer’s needs.

The a6100 offers 13 Picture Effects, six Creative Style modes and contrast/sharpness/saturation tweaks, but I tend to avoid and shoot in Standard mode and/or Raw. In my experience, the results I can achieve through editing the photos after the fact are much better than any effect or style modes in-camera. Nevertheless, they’re present for people who want them.

I would have liked to have seen the inclusion of Sony’s picture profiles; they’re especially good for videos. Picture profiles can be used to create more “filmic” looks in-camera or capture greater image data for colouring post-production. But, this is one feature for which you’ll have to spend more money on an a6400, or higher-level camera. 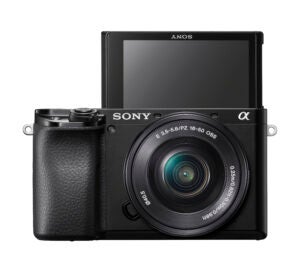 Still, the a6100 shines in video compared to its rivals, with its 4K/30p video using full-pixel readout to deliver detailed and punchy clips. And it can capture up to 120fps Full HD video, which is excellent for grabbing slow-mo moments. Unlike much of the competition in this category, you can use the a6100 while its battery is charging, making it ideal for extended video recording or time-lapse sequences. Slightly green-tinted skin tones, no headphone input and no in-body stabilisation let the a6100 down, but it’s still the camera to beat in this category.

The a6100 is standing on the shoulders of an award-winning giant in the a6000, and a family of superb and varied Sony E-mount lenses. All of the improvements in this model make a meaningful impact to performance, keeping Sony’s entry-level mirrorless offering at the top of the pile.

But that’s not to write-off the competition entirely. Pretty much every camera in this segment will deliver superb photos and high-quality video without too much effort. So how do you decide which one to invest in?

Well, what do you want to shoot? And is the camera system one that you can grow in? The Sony mirrorless system is now the most established of the bunch, making it an excellent system to invest in. As you grow in experience and skill, you can take all of your Sony fit lenses with you.

Sony’s AF system puts this camera ahead of rivals. The company has also done well to give the a6100 a solid balance of capabilities; it isn’t just aimed at vloggers and it’s not too photo-centric. This makes it an attractive option for an enthusiast creative, who perhaps doesn’t necessarily know which area of photography or video they’d like to pursue.

Looking for a solid all-rounder at entry/enthusiast level? You can’t go wrong with the Sony a6100.

The post Sony A6100 appeared first on Trusted Reviews.

Author: Jon Devo
This article comes from Trusted Reviews and can be read on the original site.