Mirrorless systems have seen a huge rise in popularity over the past few years, but support from third-party lens makers has lagged behind significantly. Sony’s groundbreaking Alpha 7 series of full-frame CSCs is now more than three years old, but there’s still no sign of matched lenses from the big names such as Sigma and Tamron.

Clearly, the Samyang’s most telling feature is its fast maximum aperture: at f/1.4, it gathers half a stop more light than Sony’s closest-priced alternatives. This makes it ideal for shooting indoors in low light, or for isolating your subjects against a blurred background.

Samyang has chosen to use an optical formula of nine elements in eight groups, with no fewer than three aspheric elements – highly unusual for a 50mm prime. In principle, this should minimise the loss in image quality at large apertures as a result of the spherical aberration typical of older fast 50mm primes.

The aperture can be set down to a minimum of f/16, with the diaphragm utilising nine curved blades to give near-circular highlights at large aperture settings. When it’s stopped down to small values, 18-point star patterns become visible around bright light sources. The minimum focus distance is a resolutely conventional 45cm, and an internal focus design ensures that the 67mm filter thread doesn’t rotate during use. To minimise flare and ghosting, an Ultra Multi Coating (UMC) treatment is applied to the glass surfaces.

Measuring 74mm in diameter and 98mm long, the Samyang is pretty sizeable for a 50mm lens. But it remains smaller than the current benchmark designs in this class: Sony’s FE 50mm f/1.4 and the Sigma 50mm f/1.4 DG HSM Art for full-frame DSLRs, particularly if you pair the latter with the Sigma MC-11 mount converter for use on a Sony camera.

Its 585g weight is also more manageable than either of the above alternatives. Personally, I found it well matched to the Alpha 7 II body, but if you believe the purpose of mirrorless systems is to substantially down-size your kit, then Sony’s two f/1.8 offerings are both considerably smaller and less than half the weight.

In terms of barrel shape, Samyang has taken a similar approach to both Sony and Zeiss. A relatively narrow-diameter section immediately adjacent to the mount leaves space for your fingers to wrap around the camera’s handgrip, and beyond this the barrel flares outwards to house the bulk of the optical system.

Right at the front is a bayonet mount for the deep petal-shaped plastic lens hood, which provides excellent physical protection to the front element and can be reversed snugly over the barrel when not in use.

While Samyang’s early offerings could feel crudely put together, its newer lenses have a rather more premium feel. This extends to the new 50mm, which certainly feels like a quality product. Metallic red and silver bands next to the smoothly rotating, finely ridged manual focus ring add a subtle touch of sophistication to the matte black finish.

However, photographers who mainly shoot outdoors should note that Samyang makes no claim of any form of weather-sealing.

Given that this is one of Samyang’s first autofocus designs, the firm has done a creditable job. Its autofocus isn’t especially quick, but for most purposes it’s perfectly adequate, and it certainly isn’t as frustratingly slow as Sony’s budget FE 50m f/1.8.

While the focus motor isn’t entirely silent, its high-pitched whirring is unlikely to be intrusive in anything other than a completely silent room. During real-world shooting, I experienced few problems with focus accuracy or consistency, particularly when the subject was placed towards the centre of the frame.

Occasionally, however, the autofocus could become unreliable with off-centre subjects, especially at shorter subject distances. Systematic analysis of this problem revealed it to be a result of two characteristics. First, the lens shows marked focus breathing: its angle of view becomes narrower at closer subject distances, which is typical of prime lenses. Second, the ‘wobble’ that’s used to fine-tune focus is unusually large.

As a result, the subject can move substantially across the frame relative to the AF detection area during the focusing process. This can confuse the camera, particularly when faced with a difficult situation – such as small subject against a complex background – and in the worst case it will give up entirely.

However, on those occasions where the autofocus doesn’t deliver, manual focus can be used instead. As with practically all AF lenses for mirrorless cameras, Samyang has employed a focus-by-wire, electronically coupled design, but it works very well indeed, allowing extremely precise focusing.

Turning the focus ring brings up a magnified view when MF Assist is enabled in the camera’s menu, and this gives the most accurate results. Alternatively, you can use the camera’s focus-peaking display – but this isn’t quite as accurate, and it isn’t really up to the task of getting your subjects critically sharp at large apertures.

While I’d fully expect a £500 fast prime to deliver excellent image quality, it would be naïve to hope that Samyang might have matched Sony’s own FE 50mm f/1.4, which is three times the price and one of the finest lenses I’ve ever used.

In practice, the AF 50mm f/1.4 FE is indeed unable to match the Sony’s biting sharpness and near-perfect optical correction, but the images it produces are highly detailed and have a very attractive character to them nonetheless.

In fact, this is a lens that gives much better images than its technical test results might suggest. It excels in giving sharply defined subjects against dreamily smooth backgrounds – a kind of three-dimensional look that can only really be delivered by a fast lens. Crucially, the background blur remains attractive at all aperture settings, unlike some lenses that can give fussy, distracting bokeh either wide open or when stopped down.

In terms of sharpness and detail, the lens performs well. At large apertures it can resolve plenty of detail – but at rather low contrast. Its field of focus isn’t flat, but slightly curved, which results in misleadingly poor MTF measurements in flat-field chat testing. However, in real-world shots of three-dimensional scenes it acquits itself well. Stop down to f/5.6 and the lens delivers bitingly sharp images from corner to corner.

Unlike the near-perfectly corrected Sony 50mm f/1.4, the Samyang shows visible distortion. Its behaviour is distinctly unusual: at long focus distances the distortion is of the barrel type, but for close-ups it transforms into pincushion. This complicates software correction, with Adobe’s profile being optimised for longer distances.

Vignetting is rather strong at larger apertures, but it can easily be removed when desired. I saw barely any colour fringing in the corners of the frame attributable to lateral chromatic aberration, and what little may be present can easily be dealt with in software.

Longitudinal chromatic aberration is a different matter, though, especially at close-focus distances, where pronounced fringing can become visible around out-of-focus elements of the image. This is much more difficult to remove, but can be addressed fairly effectively using the defringe tool in Photoshop and Lightroom.

Our Image Engineering MTF tests reveal a lens that’s a little soft wide open, but that sharpens up dramatically on stopping down. The corners of the frame lag behind the centre for sharpness, but inspection of our test shots reveals that this reflects some curvature of field, with the corners being slightly out of focus in our test chart shots. Overall, the best results are obtained at f/5.6-f/8. 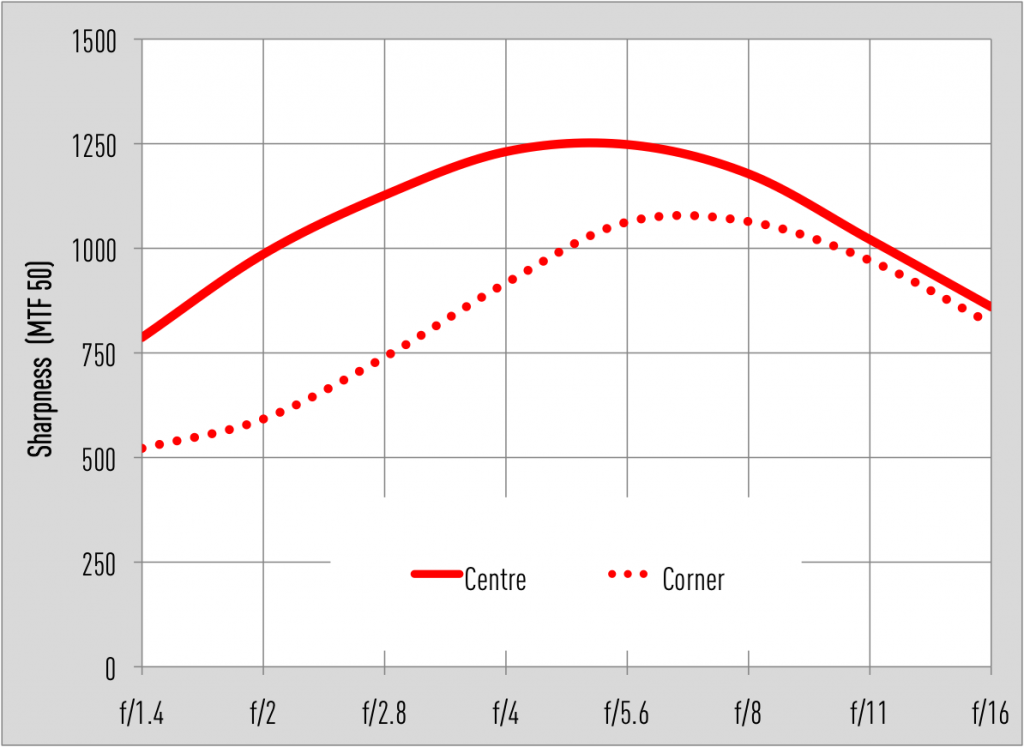 Some distortion is clearly visible in images where straight lines are placed along the edges of the frame, but it’s far from severe. Unusually, it changes in type with focus distance, from barrel at infinity to pincushion at close focus; our test shot below was taken at around 2m and is close to neutral. As usual distortion can be corrected in-camera via the Lens Comp menu setting, or using lens corrections in raw processing. It’s worth noting that Adobe’s correction profile is suitable for distant subjects, rather than close-ups.

As we’d expect from a full-frame fast 50mm prime, shading is pretty pronounced wide open, with about 1.7 stops fall-off in illumination at the corners of the frame. Stopping down to f/2 reduces this substantially to about 1.2 stops, but here the pattern is abrupt into the corners of the frame, which can be visually objectionable. Beyond f/2.8, though, only a small amount of fall-off remains visible.

With the AF 50mm F1.4 FE, Samyang has provided a genuinely interesting alternative to Sony’s own options. Compared to the FE 50mm f/2.8 macro, FE 50mm f/1.8 and FE 55mm f/1.8 ZA, it’s much larger and heavier; but in return it gathers more light and gives extra scope for experimenting with shallow depth of field. Indeed, in this respect it matches the Sony FE 50mm f/1.4 ZA for a third of the price.

Naturally, it can’t quite compete with the Sony lens’ near-flawless optics, but it’s still more than capable of producing very attractive images. Indeed. aside from its bulk, my only real concern about the Samyang is its slightly slow and occasionally unreliable autofocus, which means that users needing fast responses would likely be better off with the Sony FE 55mm f/1.4 ZA.

If you’re a Sony Alpha 7-series user who wants a modern, fast autofocus prime at a sensible price, the Samyang AF 50mm F1.4 FE is a great choice.