Since mirrorless cameras emerged less than a decade ago, the various systems have had mixed fortunes. Some have faded, while others – such as Sony’s full-frame E-mount Alpha 7 series – have been very successful. Undoubtedly, one of the factors influencing their success has been the availability of matched lenses. But while Sony has a broad range of high-end optics capable of keeping up with the demands of its high-resolution Alpha 7R II, it’s relatively short on more affordable lenses at the lower end of the range.

Korean lens-maker Samyang has spotted this gap in the market, and endeavoured to fill it. The AF 35mm f/2.8 FE is its third lens specifically designed for full-frame mirrorless, following on from the AF 14mm f/2.8 FE and the AF 50mm f/1.4 FE. Like the 50mm, the AF 35mm f/2.8 FE goes head-to-head with one of Sony’s own lenses for core spec, in this case the Zeiss-badged Sony FE 35mm f/2.8 ZA. But it’s somewhat smaller and lighter, and – crucially – considerably cheaper: just £280 compared to £680. Frankly, at this price it’s an absolute steal.

Despite the lens’ compact size – just 33mm long and 61.8mm in diameter – Samyang has managed to fit in an optical system that includes 7 elements in 6 groups, including two aspherical elements and one made of high-refractive index (HR) glass. Unusually, the front element has a concave, rather than convex, profile. Samyang has treated glass surfaces with its Ultra-Multi-Coating to minimise flare and ghosting. 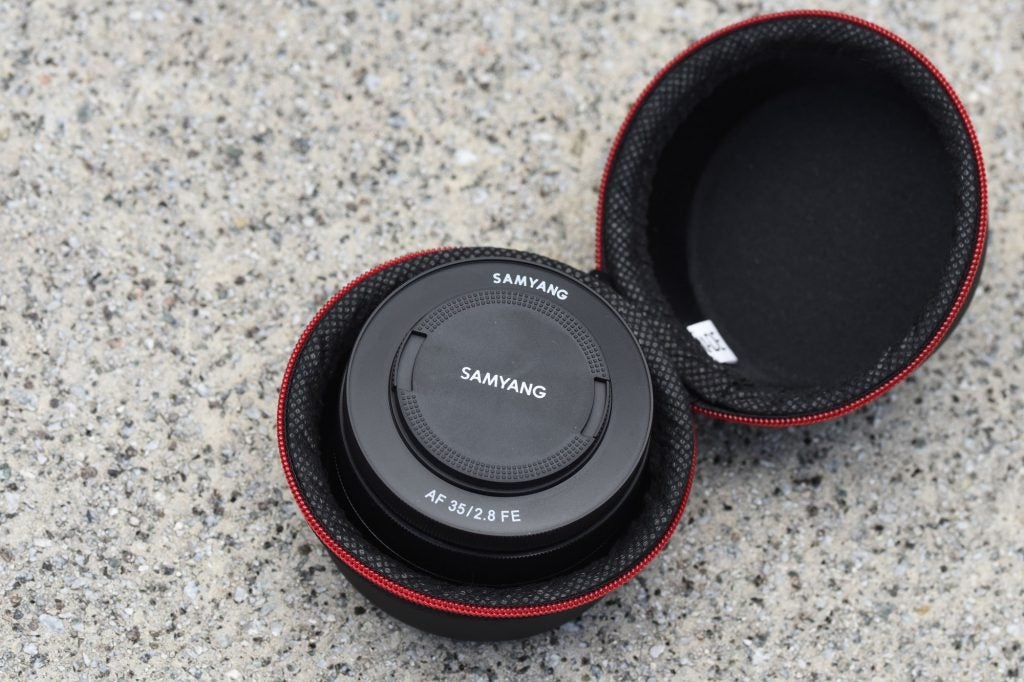 The lens employs an internal focusing design, with a minimum focus distance of 35cm, so it won’t be your first choice for close-up work. The aperture diaphragm employs seven curved blades, with the aim of giving attractive blur to out-of-focus elements of the image at larger apertures.

At the front of the barrel you’ll find a 49mm filter thread that doesn’t rotate on focusing – always a boon for polariser users. Around it is the bayonet mount for the supplied hood, which takes the form of a flat cylinder with a small circular opening at the front. This is surrounded by a secondary 40.5mm filter thread, into which the supplied lens cap clips. 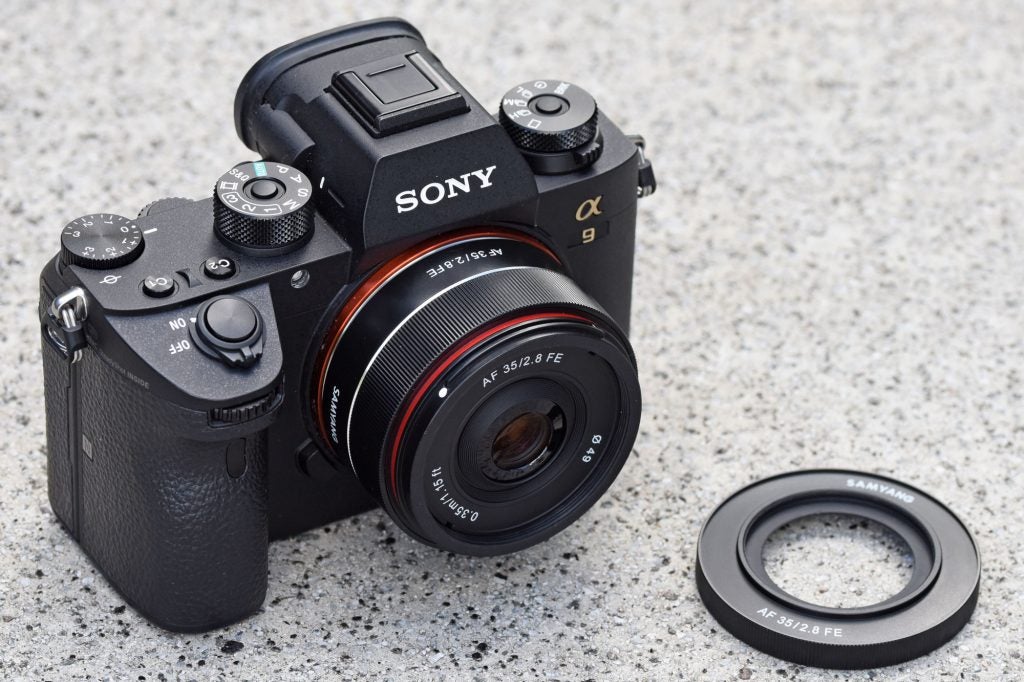 This type of hood is quite common for slim ‘pancake’ primes, since it makes the most of the compact size; it’s a right pain for filter users, however. You’ll most likely prefer to use 49mm filters, since they’re far easier to find and shared with many more lenses, but then you’ll have to add another lens cap, and quite likely a screw-in hood too. It would be nice if Samyang provided a more conventional hood as an option.

The Samyang AF 35mm f/2.8 FE weighs just 85g, which means you’ll hardly notice that it’s on the camera. In part this simply reflects the fact that the modest optical specification requires very little glass. Not surprisingly, at this price point the barrel is plastic-skinned, rather than metal, but it still feels perfectly robust.

The lens mount is silver-coloured and definitely designed to look like metal, but a close examination reveals its colour and finish to be very different to that of the AF 50mm f/1.4 FE: it’s also plastic. But, again, on a lens of such a weight there’s nothing to worry about. 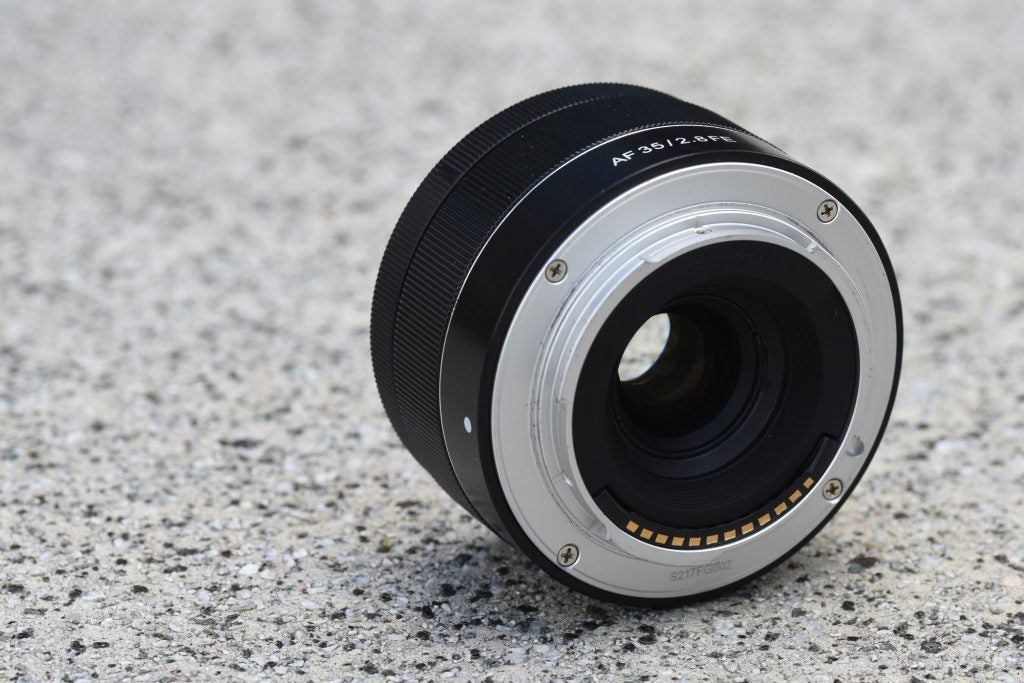 The lens has only one control, a finely ridged manual focusing ring. Again, it’s made of plastic, but it rotates perfectly smoothly with no hint of backlash. Samyang’s signature metallic red and silver rings on either side of it add a nice cosmetic flourish to the otherwise minimalist design.

When it comes to autofocus, the AF 35mm f/2.8 FE behaves somewhat like its 50mm f/1.4 cousin. It isn’t lightning-fast, but it’s quick enough for most practical purposes. In addition, while it isn’t completely silent, only the photographer is likely to hear the high-pitched whirring of its focus motor. The distinctive contrast-detection ‘wobble’ that’s used to fine-tune focus is larger than I’m used to seeing, and reveals a fair degree of ‘breathing’, with the angle of view decreasing as the lens is focused closer. However, I didn’t experience the same inconsistency when trying to focus on off-centre, close-up subjects as I did with the Samyang 50mm f/1.4.

Manual focusing also works well. The lens can automatically activate the camera’s focus-assist function when the focus ring is rotated, giving a magnified view that invariably enables the most accurate possible focus. Full-time manual override of autofocus is also available, but as always with Sony, you’ll need to remember to engage Direct Manual Focus (DMF) rather than MF mode – and turn off Pre-AF to prevent the camera from refocusing again moments later.

In terms of image quality, the Samyang belies its petite size. It’s really very good indeed, delivering impressively detailed images even on the 42.4-megapixel Sony Alpha 7R II. Naturally, it isn’t quite as sharp wide open as it is when stopped down, but the difference isn’t hugely noticeable in real-world shooting. Not surprisingly, detail in the extreme corners is somewhat smudged at larger apertures, but it sharpens up well on stopping down, and is difficult to fault at f/8.

Other aspects of image quality are similarly well behaved. I found little to worry about in terms a chromatic aberration – it can be visible in some shots if you examine images closely, but will only likely be a problem if you decide to make large prints, at which point it can be suppressed in post-processing. There’s barely any distortion, with perhaps a little barrel-type pinching in of the corners visible in highly symmetrical shots at longer focus distances; it disappears with close subjects.

Vignetting can be quite obvious at f/2.8, but in many cases it can add to the look of the image, rather than detracting from it. It can also be suppressed in post-processing, and essentially disappears by f/4 anyway.

Flare is generally well controlled, with little ill-effect from shooting directly into the light. Coma – the flaring of point light sources towards the corners of the frame – is visible at f/2.8, but it isn’t excessive and doesn’t detract from night-time shots.

If there’s one characteristic that gave me some pause for thought then it’s the lens’ bokeh – in other words, the rendition of out-of-focus areas of the frame. With relatively close subjects and distant backgrounds I found it could become somewhat messy and distracting, with distinct bright rings around background highlights. But this is all very subjective, and may not bother other photographers at all. 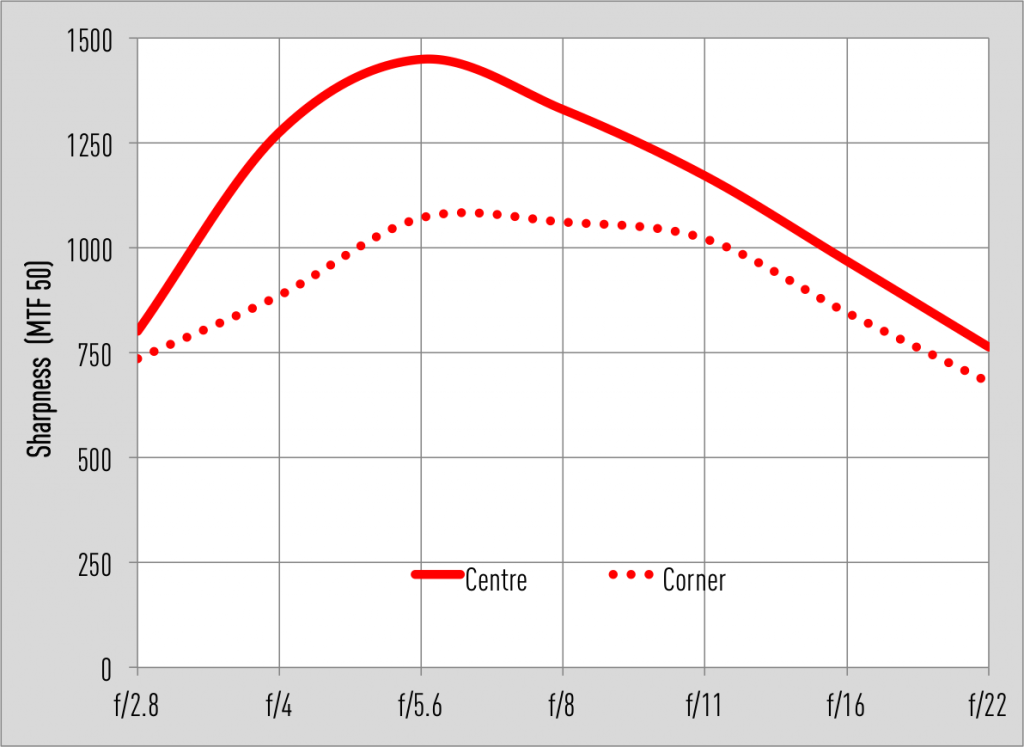 Distortion is practically non-existent, with our test chart shots giving an almost perfect description of straight lines along the edges of the frame. Technically, the measurements indicate a hint of pincushion distortion, but it’s really nothing to worry about. In longer-distance shots this unusually changes to mild barrel distortion – but again, the low extent makes it pretty much academic.

Some corner shading is clearly visible at f/2.8, which is inevitable from a lens with such a small optical unit. It isn’t especially severe, and on those odd occasions when it detracts from the subject it can be mitigated by enabling shading compensation in the camera’s menu – or after the fact in post-processing. It essentially disappears on stopping down to f/4.

With the AF 35mm f/2.8 FE, Samyang has delivered a lens that’s a perfect match to Sony’s full-frame mirrorless system. Indeed, it’s exactly the kind of small, sharp lens that will remind many photographers of classic manual focus primes. It’s a great option for situations when you want to stay unobtrusive: in particular, street photography comes to mind. Optically, it may not be a match to its closest Sony equivalent, but it’s still capable of giving pleasing images. For most Alpha 7 users, it will offer considerably better value for money.

For a great many Sony full-frame users, the little Samyang AF 35mm f/2.8 FE looks like an obvious addition to the kit bag – but APS-C camera users may want to look elsewhere.