When I reviewed the Samyang 21mm f/1.4 ED AS UMC CS in AP 20 February, I also referred to the Samyang 50mm f/1.2 AS UMC CS – a lens that, like the 21mm f/1.4, has been designed with today’s mirrorless users in mind. Both lenses arrived in the office within the space of a week of each other, and having been blown away by the image quality performance of the 21mm f/1.4, I was eager to break Samyang’s 50mm f/1.2 out of its box to discover if it was just as good.

To recap, the 50mm f/1.2 AS UMC CS is one of a pair of manual focus lenses to have been recently added to Samyang’s mirrorless line-up. It is available in four mirrorless camera mounts catering for Canon EF-M, Fujifilm X, Micro Four Thirds and Sony E-mount users. The main appeal of this lens is its bright f/1.2 aperture and its price, which, at under £300, seems a bargain.

We’re used to seeing fast f/1.2 primes fetching prices around four figures, so it’s refreshing to see a more affordable example being made for those who own smaller compact system cameras. Mounted to a mirrorless camera with an APS-C sized sensor, this lens is equivalent to 75mm, whereas it’s comparable to a 80mm fixed lens attached to a Canon EF-M mount camera and a 100mm fixed lens on Micro Four Thirds. Whatever system this lens is used with, it will appeal to photographers who would like to shoot close-cropped portraits or other subjects requiring a short, fast telephoto lens.

This lens has a different internal construction from the 21mm f/1.4 ED AS UMC CS lens we reviewed in February. Rather than employing an arrangement of eight elements in seven groups, this lens features a construction of nine elements in seven groups. The lens benefits from a nine-blade aperture to ensure out-of-focus points of lights (or bokeh) are portrayed circular. It’s possible to make out these nine aperture blades when you peer down the barrel of the lens and rotate the aperture ring across its f/1.2-f/16 range.

To minimise colour aberrations and ensure the highest contrast across the frame at all apertures, the Samyang features two aspherical lenses. These are abbreviated to AS in its product name. The UMC abbreviation that follows refers to Samyang’s ultra-multi-coating technology, which is applied to optimise light transmission and minimise unwanted artefacts such as internal reflections, flare and ghosting.

As mentioned earlier, the lens is manual-focus only and features no optical stabilisation to counteract the effects of handshake. The lack of autofocus and optical stabilisation won’t satisfy all users, but their absence does have the advantage of helping to keep the lens reasonably lightweight. On the scales it’s 95g heavier than Samyang’s wider 21mm f/1.4 prime lens, but still weighs less than 400g, which is impressive for a lens that feels solidly built with a fast f/1.2 aperture. 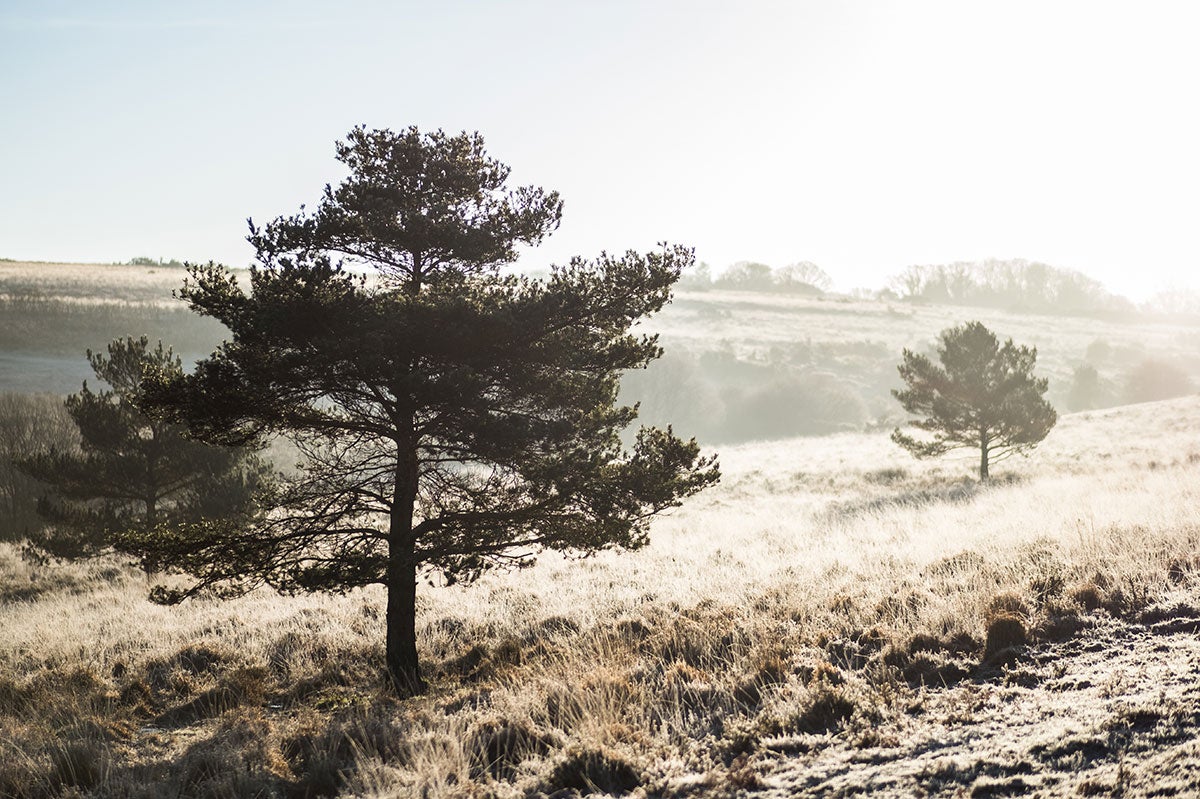 At the rear, the lens employs a good-quality metal mount, but there are no metal contacts to form an electronic connection between the camera and lens, meaning the EXIF data recorded by the camera won’t offer any information about the focal length or aperture used. If you’d like to keep a record of your aperture settings, you’ll need to put pen to paper much like I did throughout my testing.

The filter thread doesn’t rotate when the manual-focus ring is turned, but users should be aware that the front element does move back and forth. The lens comes supplied with a detachable circular- shaped lens hood that secures with a reassuring click, and it’s possible to reverse it when storing the lens in a bag. For those who’d like to know how close they can focus, it has a 50cm minimum focus distance.

First impressions out of the box are very good. For a lens under £300 you might imagine the build quality to be an area where compromises have been made, yet it feels reassuringly solid in the hand and is constructed to a standard that exceeds expectations.

The plastic used on the outer barrel and filter thread is of high quality, but just as I mentioned when I reviewed the 21mm f/1.4, the focus and aperture rings could benefit from being rubberised to offer slightly more grip when it’s used with gloves. When you’re not wearing gloves, however, the finely grooved rings provide adequate grip and are easy to find from behind the camera. 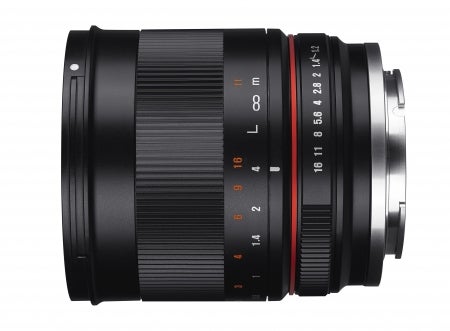 The aperture ring notches and clicks when it’s rotated, and users are provided with 1/2-stop adjustment between the aperture settings, meaning it’s easy enough to locate f/1.8 between f/1.4 and f/2, for example. If you shoot more video than you do stills, Samyang also produces a de-clicked version of the lens in the form of the 50mm T1.3 AS UMC CS Cine (£329), which has an identical optical design and is available in the same lens mounts.

The manual-focus ring offers a consistently smooth motion across the focus range, but switching over to the 21mm f/1.4 and back again made me realise that the manual-focus ring on this lens has greater resistance and requires slightly more effort to turn. For the purpose of testing, I coupled our X-mount sample to the Fujifilm X-Pro2 with which it felt well matched and nicely balanced during a prolonged spell of shooting. It’s a lens that, from my experience, feels best paired with larger mirrorless models. When I paired it with the petite Fujifilm X-T10 it had a tendency to make the camera feel more front heavy and not quite as well balanced.

The aperture settings and focus-distance markings are printed on the barrel rather than engraved, but didn’t appear to rub off easily when they were scratched with my fingers.

To achieve optimum focus with this lens you’ll either have to rely on the judgment of your eyes or put your camera’s manual-focus assist settings to good use. I discovered my sharpest results were captured using focus peaking in combination with a magnified screen view. This approach was quickly adopted for a majority of the test images that support this review, but with such a fine margin for error at f/1.2 I found myself stopping down to f/1.8-f/2.8 quite frequently.

Our lab results confirmed my real-world findings and at f/1.2 the sharpness at the corner of the frame is virtually identical to that at the centre. To achieve optimum sharpness from this lens you’ll want to close it down by a stop or two. Centre sharpness improves considerably between f/2 and f/2.8, and the sweet spot between centre and corner sharpness is found close to f/4. Acceptable images can be produced between f/4 and f/11, beyond which diffraction starts to take its toll on sharpness. Corner shading was observed in images taken at its widest aperture settings, but things quickly improve when the lens is closed to f/2 and f/2.8.

A close inspection of images taken towards the light revealed some minor purple fringing along branches and high-contrast edges. This was a relatively easy fix in Lightroom. Our distortion chart reveals the lens renders straight lines well, with no evidence of barrel or pincushion distortion. 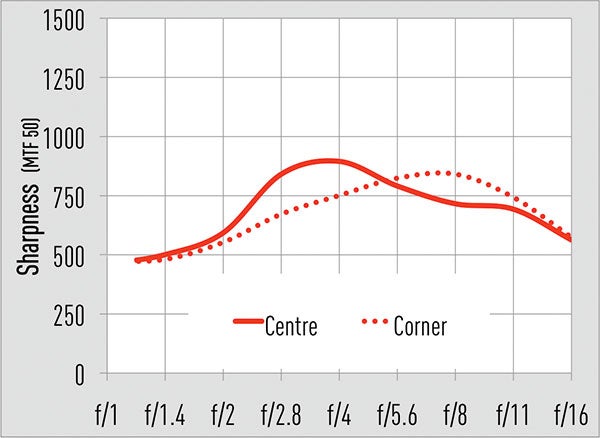 Corners appear approximately 0.7EV darker than the centre of the image at f/1.2. This is impressive for such a fast prime, and corner shading is quick to disappear when it’s closed down. There is an obvious improvement at f/1.4, and by the time you reach f/2 edges are 0.3EV darker than the centre. Vignetting won’t be an issue between f/2.8 and f/16.

A close study of our distortion chart reveals the lens puts in a great performance, and compared with the Samyang 21mm f/1.4, which displayed minor barrel distortion in its images, this lens renders horizontal and vertical lines straight with no obvious signs of barrel or pincushion distortion.

The appeal of this lens lies in its incredibly fast aperture which, combined with its focal length, can produce stunning results with a super-shallow depth of field. For mirrorless users with a passion for portraiture or other subjects where a fast telephoto zoom is advantageous, it represents excellent value and there’s nothing to suggest it won’t last a lifetime in the hands of those who care for it.

It’s not ideal for all subjects and situations, though, and you’ll want to ask yourself whether you’re prepared to spend time refining focus manually rather than letting an autofocus system carry out the hard work for you. If the subjects you photograph move erratically and you can’t control their speed, position or direction, you’re likely to struggle to find focus fast enough, which could result in unusable out-of-focus shots.

If your subject is static, or you know you have time to perfect your focus settings, you’ll have nothing to worry about, and the smooth focus ring of the lens makes the user experience enjoyable.