Panasonic introduced its first Lumix G camera and lenses back in 2008, making Micro Four Thirds the longest running of the new breed of mirrorless digital camera systems. As a result, the firm has had plenty of time to build up a comprehensive set of lenses, and all the major bases are now covered by the system – even more so when Olympus’s M.Zuiko Digital optics are taken into account. So, more recently, Panasonic has taken to fleshing out its lens line-up: last year we saw a welcome set of entry-level primes, and this year it’s the turn of some more exotic options. The one we’re looking at here is a high-end, Leica-branded wideangle prime: the Summilux 12mm f/1.4 Asph.

With an angle of view equivalent to a 24mm lens on full frame, the Summilux is one of just a few f/1.4 autofocus wideangles available for smaller sensors, alongside Fujifilm’s XF 16mm f/1.4 R WR. Its fast maximum aperture means that it gathers fully twice as much light as its most obvious rivals, the Olympus M.Zuiko Digital ED 12mm f/2 and the manual-focus Samyang 12mm f/2 NCS CS. But despite this, it’s not the fastest wideangle lens for Micro Four Thirds. That honour belongs to the Voigtländer Nokton 10.5mm f/0.95, which is a manual-focus optic that has at least half an eye on video shooting.

At a launch price of £1,199, the Summilux is not a purchase that will be made lightly, especially with the Olympus 12mm f/2 costing less than half that amount. So it will probably need to be optically spectacular to gain a significant following. With that in mind, let’s see how it performs.

With an optical formula comprising 15 elements in 12 groups, it’s clear that Panasonic hasn’t skimped on the lens’s design. This is reinforced by the use of two aspherical elements, along with one extra-low dispersion (ED) glass and two ultra-extra-low dispersion (UED) glass elements to minimise chromatic aberration and peripheral aberrations. Indeed, Panasonic claims that coma, which distorts point light sources towards the edges of the frame at large apertures, is exceptionally low.

The diaphragm is formed of nine rounded blades, and intended to give attractive background blur at wider settings. It can  be stopped down to f/16 in 1/3-stop steps, and when set to apertures of f/8 or smaller it creates attractive 18-point star patterns around point light sources.

For attaching filters, there’s a 62mm thread, which doesn’t rotate on focusing. Speaking of which, the minimum focus distance is just 0.2m, enabling interesting wideangle close-ups. One point worth noting is that the lens doesn’t include optical image stabilisation. 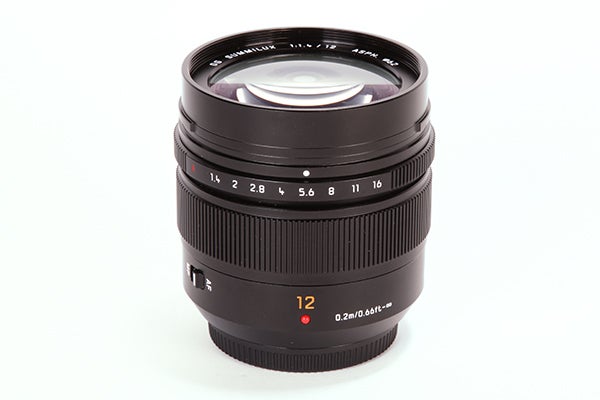 For such a steep price, we’d expect a high level of build quality, and the 12mm doesn’t disappoint. It uses a similar design template  to Panasonic’s highly regarded Leica DG Nocticron 42.5mm f/1.2 Asph OIS, with a beautifully finished metal barrel that incorporates a broad, finely ridged manual-focus ring and a physical aperture ring up front. However, as befits a wideangle lens that’s likely to get a lot of outdoor use, the Summilux is dust and splash resistant for use with similarly sealed camera bodies, including a rubber seal around the lens mount.

While the lens is certainly beautifully built, it’s not beyond reproach. As usual for Panasonic, the manual-focus ring has no end-stops, and continues to rotate with no change in feel even when the focus group has reached the end of its travel. This makes it less intuitive to use than the dual-mode focus rings seen on similar Olympus and Fujifilm offerings, which pull back towards the camera to reveal engraved focus distance scales and do an excellent job of imitating old manual-focus lenses. 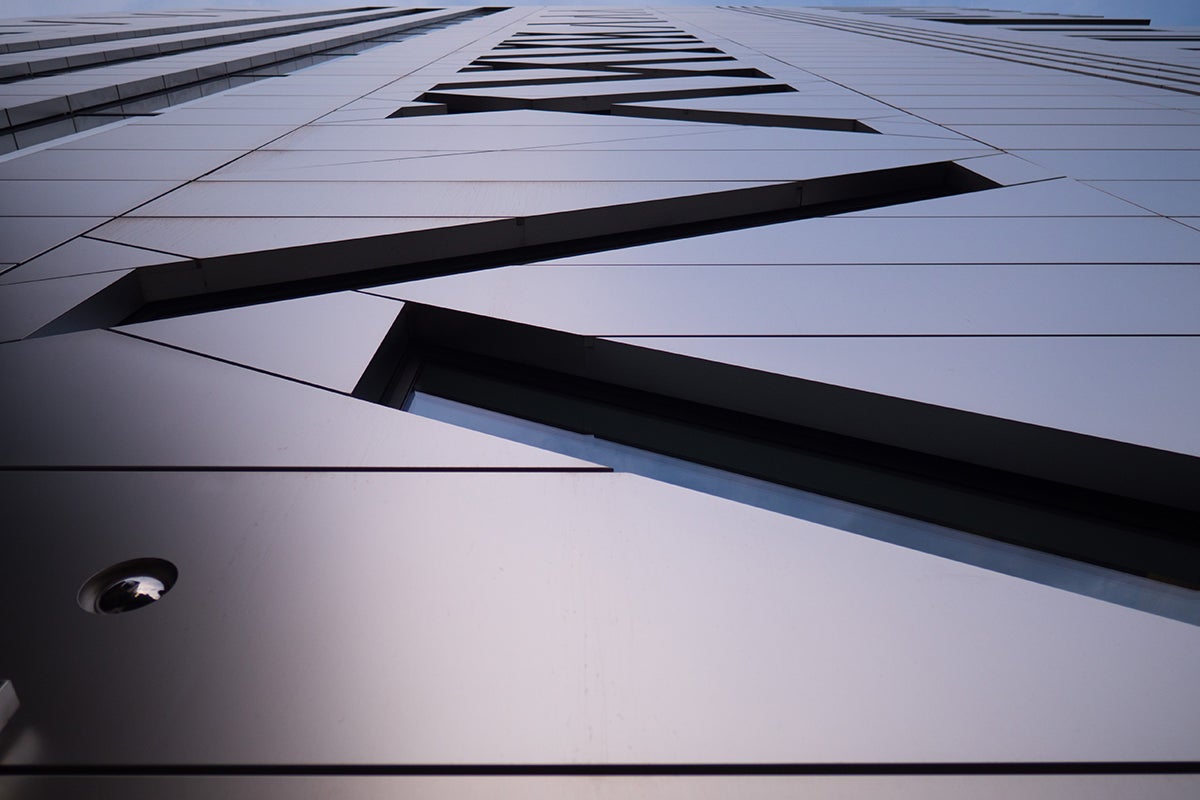 On a more positive note, the aperture ring is a very welcome addition, with click stops at 1/3-step intervals, alongside an ‘A’ position that hands control back to the camera body, if you prefer to work that way. Olympus users might, however, be dismayed to find that their cameras ignore the aperture ring entirely, in effect treating it as if it’s stuck at the A setting. It’s a shame the two companies don’t cooperate more closely on this aspect of the lens’s operation.

A metal bayonet-fit lens hood is supplied in the box, but its slim cylindrical form comes as a surprise given that petal-type designs are usually more effective with wideangle lenses. It can be reversed to save space when it’s not in use, although in this position it blocks operation of the aperture ring entirely. 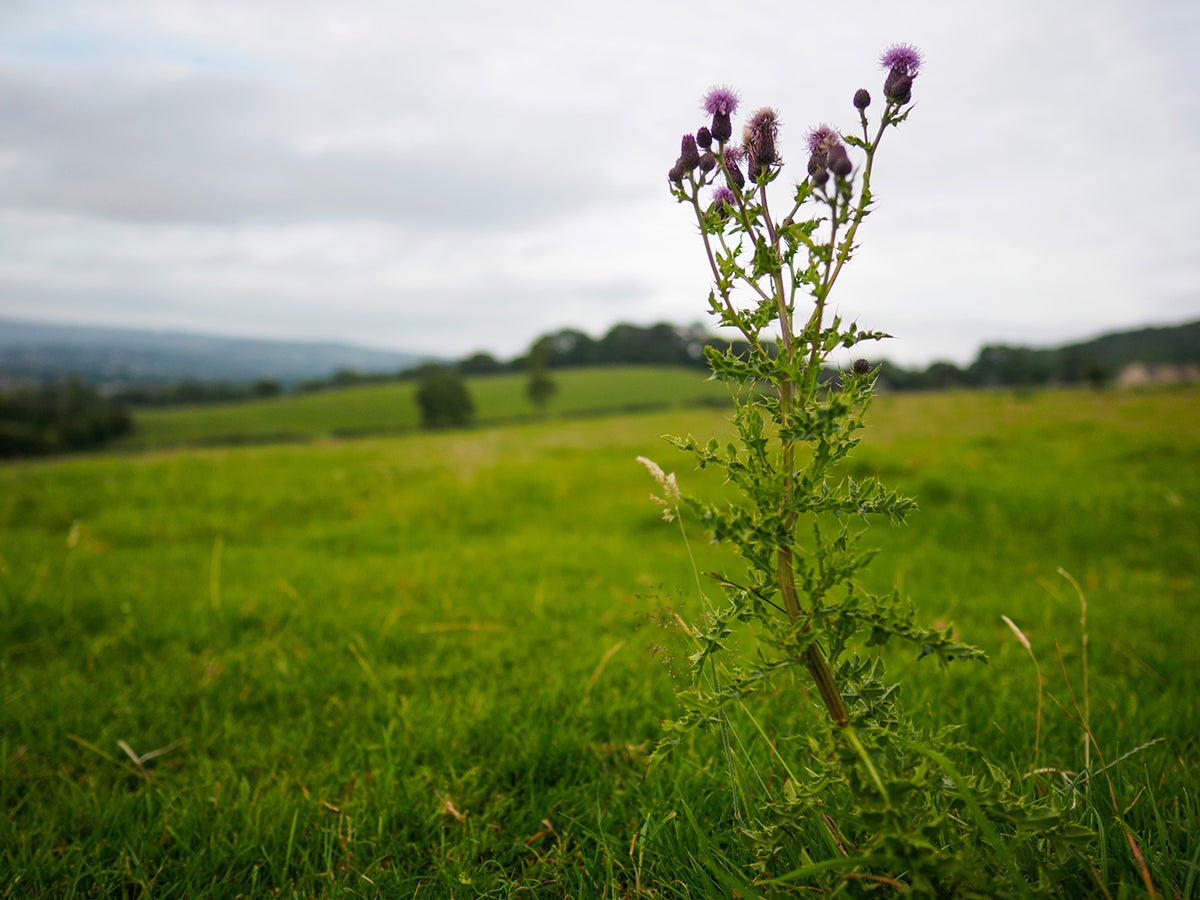 At 70mm in both diameter and length, and 335g in weight, the Summilux is relatively bulky as Micro Four Thirds lenses go. Indeed, it’s not dissimilar in size to Panasonic’s Premium 12-35mm f/2.8 zoom, and only fractionally smaller than the Fujifilm 16mm f/1.4 that covers the larger APS-C sensor.

Of course, it’s considerably more petite than Canon and Nikon’s full-frame 24mm f/1.4 optics, but on the other hand it’s rather larger than Canon’s EF 24mm f/2.8 IS USM, which should give similar pictorial effects in terms of depth of field control and background blur.

Autofocus uses an internal focus system driven by a stepper motor, and as a result it’s very fast, essentially silent, and as consistently accurate as we’ve come to expect from Micro Four Thirds. With this kind of fast wideangle prime, however, the camera can be relatively easily fooled by images that contain both depth and lots of fine detail. In this case it’s easy to switch to manual focus with a flick of the AF/MF switch on the side of the barrel, and while accurate manual focus is perfectly straightforward, as mentioned above it’s not the most tactile experience.

Of course, when you’re paying top dollar for a lens, you want it to give sharp, high-quality images. Well, have no fear, because the Summilux 12mm f/1.4 does just that. Wide open, it captures plenty of fine detail, especially in the middle of the frame. Indeed, viewing images close-up on-screen reveals that images shot at f/1.4 are barely distinguishable from those taken at f/2.8 or f/5.6 in respect of central sharpness. Stopping down further brings visible diffraction softening, and personally I’d avoid venturing beyond f/8 – but that’s absolutely normal for the Four Thirds sensor format.

In normal use, distortion is invisible owing to Panasonic’s adoption of modern lens design principles that integrate software corrections into the imaging chain. Likewise, lateral chromatic aberrations are effectively suppressed when the lens is used on Panasonic cameras or newer Olympus bodies. However, a little green and magenta colour fringing can be seen towards the corners of the frame with older Olympus models, including the original OM-D E-M5, but it’s far from problematic. Longitudinal chromatic aberration can be more of a problem, with some green fringing visible in out-of-focus backgrounds and magenta fringing in foregrounds; this tends to be most obvious at close focus distances.

Flare is rarely a problem, with the lens handling bright light sources relatively elegantly. Even when the sun is placed directly within the frame, any loss of contrast is localised to the surrounding area. As usual, stopping down gives more defined, less diffuse flare patterns.

With its f/1.4 aperture, the Summilux can give some decently blurred backgrounds, although the subject will need to be very close to the camera for this to be really effective. Also, because it’s a wideangle lens, a careful choice of camera angle will be necessary to avoid overly fussy, distracting backgrounds. However, the aesthetic quality of the blur it creates can actually be rather attractive.

Sharpness is very impressive indeed, particularly in the centre of the frame. The very best results are obtained at f/2.8, with diffraction visibly softening fine detail at smaller apertures. The extreme corners aren’t quite so sharp, although in part this likely reflects the effects of curvature of field in our flat-field chart testing. The sharpest results overall are obtained at about f/2.8-f/4, while f/11 and f/16 should generally be avoided.

Some vignetting is visible wide open, but at less than a stop it’s not especially strong. The broad fall-off profile also means that it’s by no means visually objectionable. Stopping down to just f/2 sees vignetting drop to negligible levels.

Users will see no trace of curvilinear distortion in normal operation. However, as usual for Micro Four Thirds, Panasonic employs software correction to correct distortion, with the relevant parameters embedded in the raw file and honoured by most mainstream raw converters. Uncorrected raw conversions reveal obvious barrel distortion. 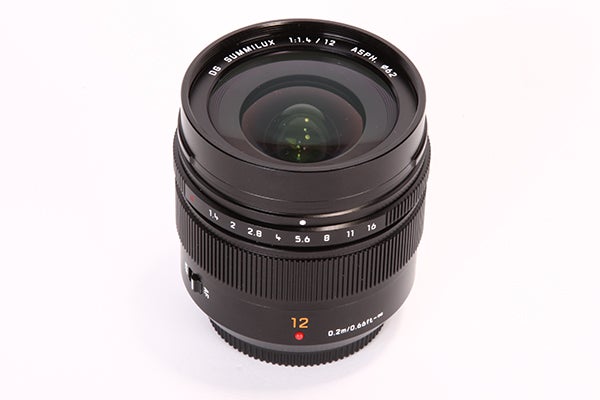 With its fine optics and robust metal construction, there’s a lot to like about the Summilux 12mm f/1.4 Asph. Its fast maximum aperture should please Micro Four Thirds users who like to shoot in low light, while its robust dust and splash-proof construction will appeal to landscape photographers who need a lens that can perform outdoors in less than perfect weather conditions. Likewise, its fast and silent autofocus will be a benefit for wideangle documentary shooting.

There are a couple of small concerns, though. For example, the manual-focus ring isn’t especially tactile, and while the aperture ring is really nice to have, it’s disappointing that it still won’t work on Olympus cameras. But the biggest stumbling block is the price – £1,199 feels like an awful lot to pay for this lens, especially when Fujifilm’s similarly fine 16mm f/1.4 costs two-thirds of the price. However, Micro Four Thirds users willing to stump up the cash are unlikely to be disappointed by the lens’s performance. 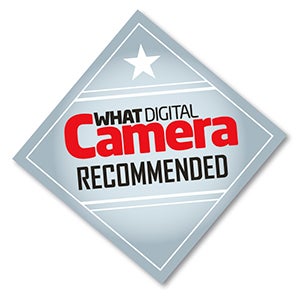