It’s been a busy couple of years in the world of mirrorless. Nikon’s first full-frame mirrorless models, the Z6 and Z7 are two years old now, and the system is expanding nicely.

Those two original models were aimed pretty squarely at enthusiasts and/or pros, so it felt like only a matter of time before a more beginner-friendly full-frame model appeared on the scene. Enter, the Nikon Z5, a camera set to take on rivals such as the Canon EOS RP and the Sony A7 III.

We also have rumours that further entry-level models from Panasonic and Sony are about to make an appearance, so it’s clearly a target market that the industry is keen to capitalise on.

The Nikon Z5 uses pretty much the same external body design as the Z6/Z7, with a couple of small, but key, differences. Internally, the specs represent a compromise because it’s a cheaper camera, but it should still be appealing to a broad range of customers looking for a new. 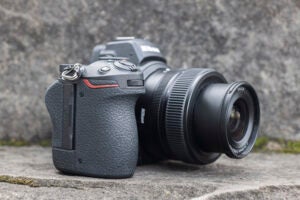 So, you get a 24.3 megapixel full-frame sensor, which sounds similar to the Z6’s 24.5 megapixel sensor – but the crucial difference is that it doesn’t have backside illumination, which is likely to impact low-light performance.

Other specifications include a high-resolution sensor which is shared with the Z6/Z7, 4.5fps shooting, 4K video which is subject to a heavy crop, and a tilting touch-sensitive screen.

Nikon has used a body design which is incredibly close to the one it uses for the Z6 and Z7. The dimensions are almost identical, so if you do happen to already have one of those and are looking for a backup model, this would make a great option. For those who are brand new to the brand (or indeed “proper” cameras in general), it’s got a sensible button layout and dial configuration that is intuitive and easy-to-use. 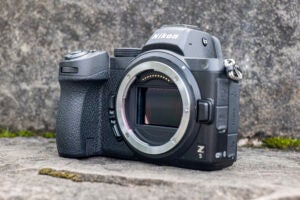 There’s a great grip which feels very high quality. Unusually for an entry-level model, the Z5 is weatherproof so you can use it in a range of different shooting conditions.

One thing which is missing when compared to the Z7/Z6 body is the top-plate LCD. It’s not particularly surprising to have this absent, as it’s an easy way to bring the price point down. Instead of the top screen, the mode dial has been moved into its place, which puts all of the main buttons and dials on the right hand side of the camera – that’s great when you’re shooting one handed.

It’s somewhat surprising to see that Nikon has kept the same very high-resolution viewfinder as found in the Z6 for the Z5. Not scrimping on this important specification gives it an overall great feel, and also indicates that Nikon primarily sees this as a camera for stills photographers. That feeling is confirmed by the screen, where a compromise has been made – resolution at 1.1 million pixels is a fair bit lower than that found on the Z6/Z7. The good news however is that it still tilts for shooting from awkward angles and is touch-sensitive. A fully articulating screen is likely to be preferred by video shooters, too. 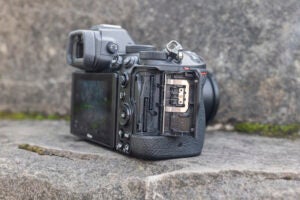 Although using roughly the same body shape as the Z6/Z7, Nikon has found space to include two card slots for the Z5. It uses the less robust SD format, rather than a single XQD slot, but those who like the flexibility and reassurance of a backup or overflow slot will probably be fine with that compromise, and it also makes good sense to enthusiasts who are already equipped with existing SD cards.

Although the sensor inside the Z5 is not quite the same as that which is found in the Z6, it’s capable of producing fairly similar images, particularly in good light. The lack of back-side illumination means that images are a little noisier when shooting at very high ISOs, especially if you examine an image closely. How often you tend to shoot in very low light – as well as how closely you examine your images – will tell you how important that is to you. If you are someone who consistently shoots in low light, it’s certainly worth making the extra outlay to get hold of the Z6. 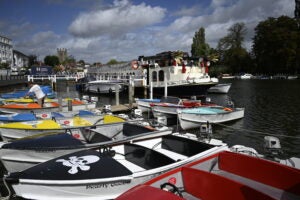 Generally though, pictures display a pleasing level of detail, with lovely colours which are vibrant but remain true to life. The 24-50mm kit lens is a good lens to get you started with, especially if you’re travelling and want to keep your kit as light as possible, but it’s fair to say that it’s not quite as super sharp as other Z lenses.

As the Z5 uses the same autofocusing system as the Z6, we expected it to perform pretty well. It does a reasonable job of following moving subjects around the frame, while the Auto Area AF picks out human eyes with ease. It can pick out some animal eyes, but it’s not quite as accurate as Sony mirrorless cameras promise the same feature – again, that will likely bother you less if you don’t photograph animals all that often. 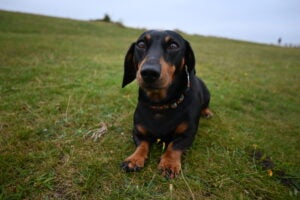 The big disappointment here is that the Z5 can only muster shooting at 4.5fps. It struggles therefore to capture split-second action, and if you’re somebody who wants to shoot that kind of thing with any regularity, it’s probably not the right model for you – the Z6 by contrast offers 12fps shooting.

When it comes to battery life, the Z5 has a longer official rating than the Z6 – perhaps because of the missing top plate and the lower-resolution screen. Whatever the technical reason, it’s rated for 390 shots when using the viewfinder, but you’ll almost certainly get more from it than that on any given average day. You can also expect more if you shoot exclusively with the screen, where you get an official rating of 470 shots. It can also be charged via USB so you can give it a power burst while on the go, as well as not have to worry about packing dedicated chargers when travelling. 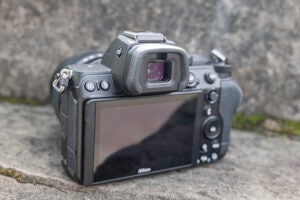 Although this camera is not particularly aimed at videographers and video-content creators, it does include an HDMI out connector, as well as a port for an external microphone.

Should you buy the Nikon Z5?

The advice on whether you should buy the Z5 largely comes down to what kind of photographer you are.

It represents an excellent choice for those new to full-frame – indeed, even those who are new to proper cameras will also find it appealing too.

With a well-performing sensor, an excellent viewfinder, and a range of other specifications that make it work well as a good all-rounder, it’s a camera you can just pick up and start taking great shots with.

That said, if you’re into making videos, or think you’ll be shooting a lot of action sequences, there are better cameras on the market – including Nikon’s own Z6 model.

At the moment, the Z6 is available for not too much more than the Z5 too, so until prices for the Z5 come down, it’s probably fair to say that the Z6 represents better value for money.