The Garmin VIRB XE grabs all your extreme sports data along with its video.

What is the Garmin VIRB XE?

The VIRB XE is Garmin’s latest action camera. Although it may seems odd that GPS manufacturers are now making camcorders, the erosion of their market thanks to smartphones, and the obvious connection between GPS technology and extreme outdoor activities, makes the development logical. The VIRB XE builds on the original VIRB Elite, which had plenty of novel features to make it worth considering.

Rather than being an evolution of the first VIRB generation, the XE is a completely new model. Unlike the bullet-camera format of the original, the XE is more GoPro-like and features many innovations that seperate it from the crowd.

Garmin doesn’t quote any ingress protection (IP) ratings, but the company does claim the VIRB XE can operate at temperatures from -20C to 45C. It can even withstand five atmospheres of pressure, which equates to a depth of 50m underwater. This is achieved with a secure locking panel on the front of the device, which would be extremely difficult to knock open accidentally. 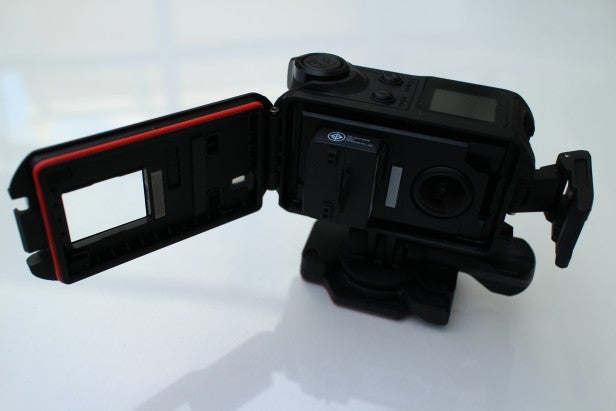 Releasing the panel reveals a 980mAh removable battery, rather than the 2,000mAh of the VIRB Elite. The smaller battery means the XE has a two-hour quoted battery life, rather than three, although this is still more than many action cameras offer.

Also note that the easily removable battery means you can bring spares, which cost about £15 each online.

A greater disappointment is that the handy screen on the original VIRB has been lost. Although you won’t easily be able to use this when you’re hurtling down a mogul piste, it certainly helps with angling the camera correctly, so you don’t need to rely on a smartphone.

In its place is a monochrome LCD panel, which does at least allow you to configure settings without the need for a smartphone connection – unlike some action cameras, such as Panasonic’s HX-A1ME.

So, apart from the loss of the video display, the physical construction of the VIRB XE is impressive. On paper, the internal specification and shooting options are too.

However, the underlying sensor is the same 1/2.3in in size, and actually has a reduced 12.4-megapixel resolution. Unlike the majority of action cameras, the VIRB XE features image stabilisation. Although this is primarily electronic, the VIRB XE also uses gyro-detection to enhance its capability. I found this did have some positive effects on the jerkiness of video. While it isn’t as effective as a good optical system, it’s worth having.

Garmin has been reasonably generous with the mounting bundle. There are adhesive mounts for flat and curved surfaces, alongside long and short linkages. However, there’s no strap or tripod mount in the box. So if you want to attach the VIRB XE to your wrist – or a bar without using adhesive – or a tripod, you’ll need to add optional extras.

There’s a huge range of extra mounting kits available, however, including harnesses for both long and short dogs! 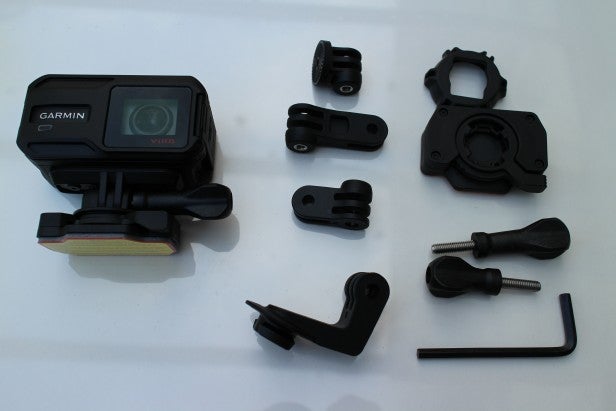 Using the built-in LCD, the VIRB XE offers a range of settings. The field of view can be configured with two levels of electronic zoom, and there’s built-in lens distortion correction that can be enabled. You can also record video upside down – handy if the camcorder is hanging beneath, rather than sticking up on top of, its mount. 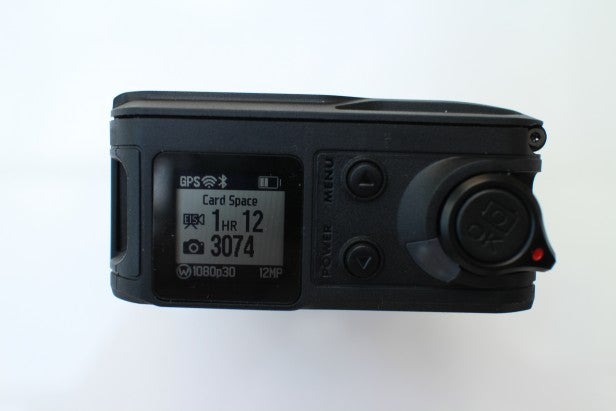 There are Pro Settings available too, including vivid or flat-colour curves, white-balance presets from 2,800K to 7,500K, and three levels of video sharpening. The auto-exposure can be limited to 6400, 1600 or 400 ISO, so you can balance image brightness with grain. Although there’s no direct control over shutter or iris, there is an exposure bias available with 13 steps between +2 and -2. 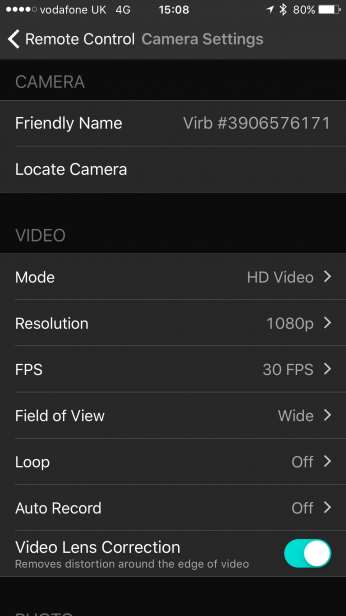 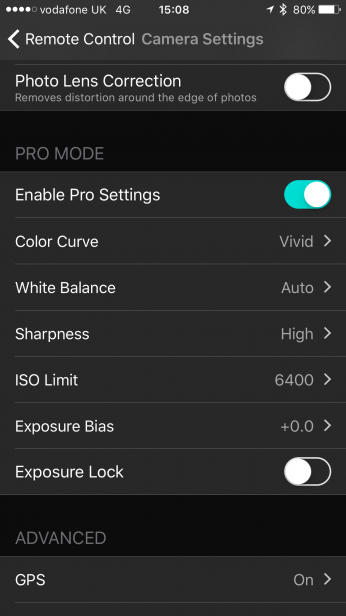 Exposure can be locked, too, which is handy if there will be occasional extremes of lighting, such as passing headlights or the camera occasionally pointing towards the sun. These settings are almost identical to the Protune controls on a GoPro, so should please users of the HERO range. All of these settings can also be controlled via the smartphone app, which provides the usual live preview and facility to toggle recording or stills capture.

One of the chief selling points of the VIRB Elite was its built-in GPS and ability to record from other Garmin sensors. The VIRB XE has similar functionality, although Garmin is now calling this G-Metrix, but the VIRB XE doesn’t have a built-in altimeter, which was present in the VIRB Elite.

The sensor information can be displayed alongside the video, so you can show your speed or heart rate as it changes during the video recording. 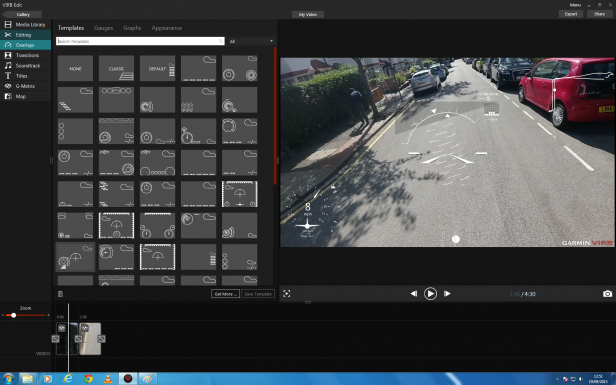 Compatible sensors include heart rate, speed/cadence, power and temperature. The ANT+ connection is used for these, and also provides connectivity to Garmin’s separate remote control.

Bluetooth is available for connecting external audio devices and some sensors. Garmin provides its own software – VIRB Edit – for integrating the sensor information onto the video and outputting the results, or even publishing directly to YouTube.

The VIRB XE’s decent-sized sensor promises capable image quality, and I found the end results were commendable. In 1080p Full HD, a data rate of more than 20Mbits/sec is used, which allows for relatively low compression. However, I did see a little softness in the quality of footage, even if colour fidelity is very good. Sharpness is improved in good lighting, however, implying that this is a video gain issue.

Here is some sample footage shot with the Garmin VIRB XE at the 1080p resolution at 60fps.

Despite this, I was quite impressed by the low-light performance. The VIRB XE captures bright and colourful footage in quite poor illumination – actually a little better than my own eyesight – and the grain isn’t significantly worse.

In fact, here the VIRB XE surpasses Panasonic’s HX-A1ME. I also hooked up an ANT+ heart-rate monitor without any problems, and was able to view the data via the VIRB Edit software without the need for additional software configuration. 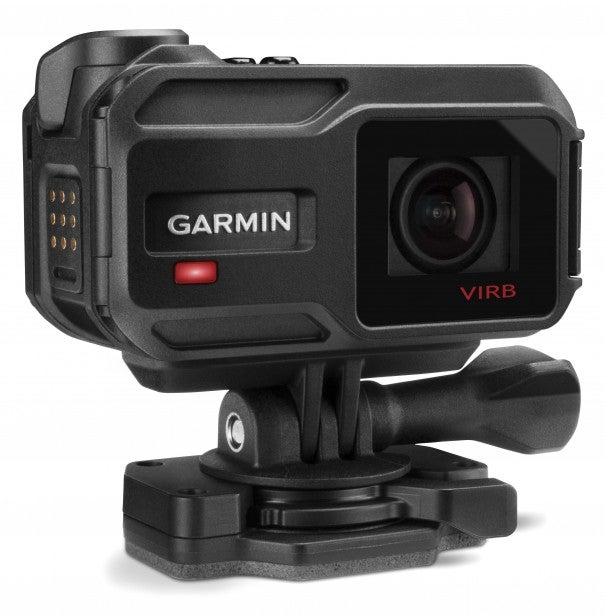 Should I buy the Garmin VIRB XE?

Although the action camera market is becoming increasingly crowded, Garmin has managed to produce an extreme sports camcorder with enough novel features to make it worth considering.

The lack of a 4K shooting option is a shame, but otherwise there are some excellent resolution and frame-rate choices available, handy manual settings, sensor connectivity and good image quality. There’s also a cheaper VIRB X to consider, but that loses the 1440p and higher frame-rate video options, so the XE is worth the extra £80.

The VIRB XE is another capable action camera release from Garmin, with a robust build and the ability to superimpose GPS and sensor information onto your footage.