A dashcam and premium satnav in one handy package

What is the Garmin DriveAssist 50LMT-D?

The Garmin DriveAssist 50LMT-D is a 5-inch satnav with a built-in dashcam. Garmin’s Drive models offer improved features as you move up the range. The basic Drive provides driver-awareness features that earlier units didn’t have, and the DriveSmart adds voice commands, Bluetooth smartphone connectivity, plus live traffic updates. The DriveAssist primarily adds the dashcam to the mix.

The key differentiating feature with the DriveAssist is its integrated dashboard camera. Unlike the nuviCam, the camera is much more subtly integrated into the body, but it can still be rotated left and right. This is handy, since you’ll want to angle the satnav screen towards you, so the camera will need to be rotated to compensate. There’s a setup routine to help with calibration.

The dashcam captures video at Full HD resolution (1,920 x 1,080) or 720p (1,280 x 720). In both cases, footage is recorded at 30 frames per second. At Full HD resolution, it does so at about 7Mbits/sec, which is a little low for this frame size and rate, but still shouldn’t be too prone to compression artefacts.

Most satnavs have a MicroSD slot for adding new or custom maps, and is often never used, but the DriveAssist needs its removable storage for the dashcam. In fact, it has two slots, with one for maps and the other dedicated to the dashcam.

The latter comes with a 4GB MicroSD card, which will be enough for about 76 minutes of footage at Full HD. After this, the oldest files will be replaced by new ones. There doesn’t appear to be any way to disable loop-recording, although you can press a button to save the most recent clip and prevent it from being recorded over. This is in addition to its automatic collision detection function. 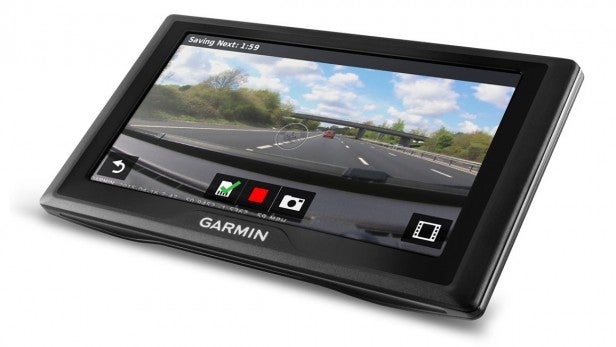 The dashcam offers some extra features too. The Real Vision system swaps to a camera view with an arrow showing where you need to go – a kind of augmented reality. However, I didn’t see this kick in at all during testing.

A selection of the latest dashcam widgets are also available, although I’ve seen all of them elsewhere before. There’s Forward Collision Warning, which operates above 30 miles per hour to provide a notification if you might be approaching the vehicle in front too quickly, with three sensitivity levels available. The Lane Departure Warning kicks in above 40 miles per hour, to let you know if you’re drifting across lanes on a motorway.

Go Alert will ping if you’re stationary and the car in front starts moving, so you can get going too. Probably the most useful features, however, are the Automatic Incident Detection and Data Overlay. The former uses the built-in G sensor to figure out if a crash has occurred, after which the most recent video file will be saved; the latter embeds time and location in the video frame, for use as evidence.

As well as the dashcam, new capabilities from the lesser members of the Drive range are available as well. Driver awareness features include warnings when you drive past nearby schools, safety camera alerts, and fatigue warnings when you’ve been driving too long. There is an excellent voice command system, too.

Connect your smartphone via Bluetooth, install the Smart Link mobile app, and you can use the satnav as a hands-free kit, or set up locations on your phone to send to the DriveAssist. This will also provide weather updates and the option to install additional services that are delivered via mobile data, such as the ability to view live traffic surveillance camera footage. DriveAssist is also compatible with Garmin’s backup camera and babyCam.

The DriveAssist’s mounting is a slight departure from other members of the Drive range. The unit is intended to hang down from near the top of your windscreen, because the camera is situated just below where the mount connects to the satnav – although you can turn the mount the other way round if desired. The quick-release is a plastic plate that spans the whole height of the device, with a gap in the middle for the camera to poke through. 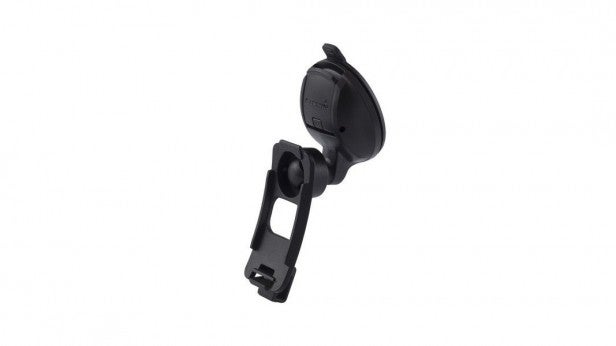 The power connection is a regular mini-USB and isn’t integrated directly into the mount, so this will need to be disconnected when the satnav is taken out of the car. The car power plug is captured, too, so a cigarette lighter output is a necessity. You can’t use a different cable, because the one supplied includes the receiver for the DAB-based traffic update system.

The onscreen menu is the same design that’s been used for several generations of Garmin satnavs. The main screen has two large icons to take you to the destination search or the map, with smaller ones along the bottom for supplementary apps and settings. Searching for a destination is keyword-based across both addresses and Points of Interest, although category-based options are also available.

The model I tested included maps of Europe, with the Eastern portion as far as Ukraine and Latvia, plus Turkey, but not Russia. These come with lifetime updates, so will always be the latest versions if you can get around to downloading the 7GB or so required for a new set.

Like the menu, the navigational view is pretty much the same as that of the past few generations of Garmin satnavs, apart from the extra Smart features already mentioned. The view is three dimensional, and there are 3D landmarks in built-up areas to help you navigate, with current speed and arrival time at the bottom, and the current street name in between.

The prevailing speed limit is on the left, and the next turning is shown clearly at the top. A journey summary pops up on the right edge, although fortunately, only for a short time since the 5-inch screen feels crowded when it’s visible. This isn’t a particularly high-resolution screen, but it’s bright and easy enough to read, and the capacitive touch tech means it’s more responsive than cheaper resistive touchscreens. 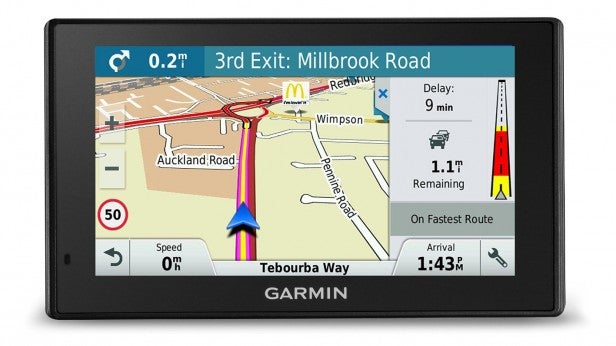 Like the DriveSmart range, the DriveAssist comes with Digital traffic with lifetime updates, supplied via the DAB radio receiver in the power cable. This is a decent system, and more regularly updated than RDS-TMC. But coverage isn’t as extensive as TomTom’s Traffic, so you won’t avoid gridlock so successfully.

Now that we’re seeing a greater number of dashcams sporting resolutions above Full HD, the DriveAssist’s 1,920 x 1,080 footage is a little pedestrian. The camera copes reasonably well with contrast and darker conditions. Within about 20ft it’s possible to read number plates without too much difficulty. But overall image quality is merely decent, rather than outstanding.

Should I buy the Garmin DriveAssist 50LMT-D?

The Garmin DriveAssist 50LMT-D is a capable combination of premium satnav features with a reasonable, if not outstanding, dashboard camera. For a £50 premium over the DriveSmart 50LMT-D, which is otherwise identical in specification, you’re not paying over the odds for the dashcam addition. The satnav abilities are excellent, making this a tempting integrated package, although still not a particularly cheap one overall.

The Garmin DriveAssist 50LMT-D combines a decent dashcam with a very good satnav for a reasonable, if not exactly low, price.